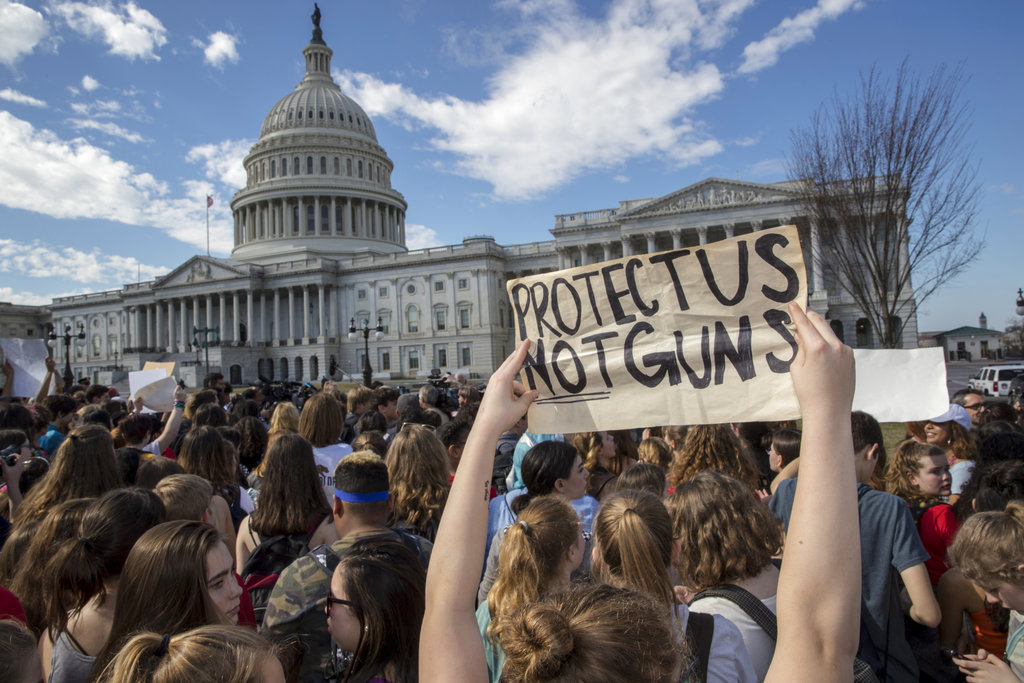 Students from Montgomery County, Md.,rally in solidarity with those affected by the shooting at Parkland High School in Florida, at the Capitol in Washington on Wednesday. (AP Photo/J. Scott Applewhite)

From a Jennifer Rubin column in The Washington Post:

“One in five Americans have protested in the streets or participated in political rallies since the beginning of 2016. Of those, 19 percent said they had never before joined a march or a political gathering.

“Overwhelmingly, recently motivated activists are critical of Trump. Thirty percent approve of the president, and 70 percent disapprove, according to the poll. And many said they plan to be more involved politically this year, with about one-third saying they intend to volunteer or work for a 2018 congressional campaign.”

Demographic groups previously disposed to vote for the GOP, especially suburban voters, have been jolted into action. “A significant number — 44 percent — are 50 or older, and 36 percent earn more than $100,000 a year. Far more are Democrats than Republicans. An equal percentage are men and women. An outsize share live in the suburbs.” These would include the suburban voters, for example, who turned out in droves to elect Ralph Northam as Virginia’s governor.

The poll also tells us:

“Half of those attending political gatherings were spurred to action at least partly by Trump. Many also turned out to express their views on a range of issues — most prominently women’s rights, the environment, immigration, LGBT rights, the Affordable Care Act, abortion, police shootings or gun laws. …

“In addition to the large number of rallygoers, the poll showed an even bigger number — over 1 in 4 — of more quietly politically active adults. These people took multiple political actions, such as volunteering for a campaign, joining a boycott or donating money.” …

There are a few takeaways from the polling.

First, Trump routinely attacks and undermines democratic institutions and norms, but he has triggered a remarkable resurgence of participatory democracy. The determination of so many Americans to fight for their democracy and their principles should be encouraging to those who have been sounding the alarm about Trump. We might have become complacent about our democracy and our presidents’ adherence to informal rules of civility and decency; Trump has ended that complacency.

Second, rallies that go beyond pure politics to encompass social and cultural issues (e.g. #MeToo) might have a longer-lasting and more profound impact on voters than a policy position (for or against tax cuts; for or against a balanced budget). A cultural movement that affects more than just politics will pack a much stronger punch than run-of-the-mill partisan politics.

Finally, this outpouring of activism is happening just as the largest, most diverse generation ever — millennials — reaches political maturity. They were already more progressive than older generations …. Certainly, for teens who have been able to rouse the nation and shift attitudes about guns, political activism might become a central feature of their lives and define their politics long after Trump has left office.

… Americans are thinking seriously about democracy, striving to bolster the political norms that Trump is tearing down and connecting with their fellow citizens in ways they have never done before. America’s democracy has a pulse, and through exercise it’s becoming stronger.