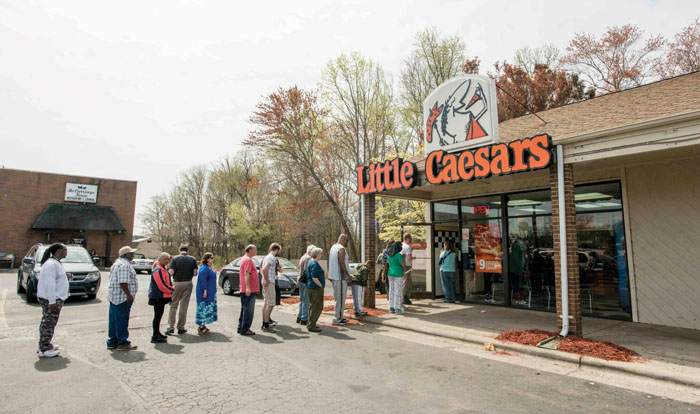 Little Caesars pizza made good on a promotion to offer free pizzas for lunch after committing to the offering if a 16th seed team beat a 1st seed during the NCAA basketball tournament. Jon C. Lakey/Salisbury Post

SALISBURY — Little Caesars lost big on a bet it made last month after the University of Maryland, Baltimore County, made history in the NCAA basketball tournament.

The pizza chain said it would give away free lunch combos in restaurants nationwide should a No. 16 seed school ever beat a No. 1 seed.

Then it happened: the UMBC beat the Virginia Cavaliers 74-54 on March 16.

Just over two weeks later, the chain made good on its promise Monday. For one day only, stores nationwide provided hungry patrons with a free “Crazy Combo”: a four-slice deep-dish pizza with pepperoni and a 20-ounce Pepsi product.

And there were plenty waiting for the freebie. At Salisbury’s Little Caesars on Statesville Boulevard, more than 30 people lined up before the doors opened.

Cary Ward said he heard about the free offering from his daughter in Cincinnati.

Others in line said they had plans to enjoy a lunch of leftovers before they learned of the giveaway. All said they were happy for the on-the-house upgrade.

The crowd may have presented a logistical challenge for Salisbury’s small store, but manager Chris Haralson said the staff fared just fine.

“We were all excited about it,” Haralson said, then added with a laugh. “We all pulled together as a team and knocked it out like we were supposed to. We didn’t have a choice.”

Haralson said he couldn’t have asked for a better turnout. He said the store gave out nearly 300 pizzas.

That number required some definite operational planning, he said. Haralson said it took a day — Sunday, to be exact —  to decide who on the staff would be where and doing what.

Some assembled boxes, others manned the ovens and two handled the registers, making the line move quickly.

The giveaway was limited to one per family and while supplies lasted. Haralson said the restaurant ran out of free pizzas. Thankfully, he said, that was just as the clock struck 1 p.m. — the end of the giveaway.

“It went great,” he said late Monday afternoon. “Everything went smooth. There were no hiccups, not a single complaint. We had it all prepped and made it happen.”