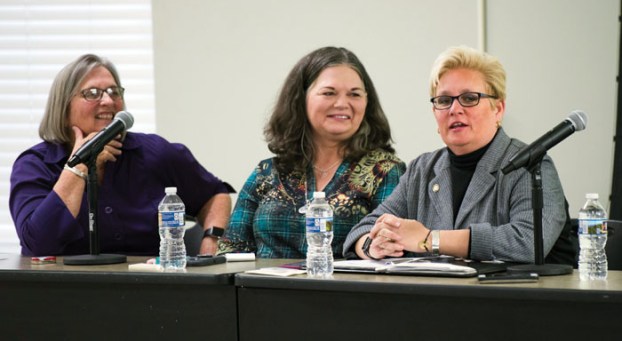 “You never stop coming out. And that’s hard,” Tamara Sheffield said at Pfeiffer University’s Coming Out Forum from Different Perspectives on Monday night.

Sheffield used the example of introducing her wife to new people not knowing how they’d react.

Sharon Bard, who works at Pfeiffer, described growing up in the 1960s and 1970s.

“You always think about being found out and losing your job,” she said.

When she came out at Pfeiffer, though, “they were all loving and caring,” Bard added.

Donna Odrosky, president of Salisbury-Rowan PFLAG, spoke from the parent perspective about when her daughter came out. “I said, ‘I love you. I’m not getting rid of you. I think you’re born this way.’”

Sheffield, who is a member of the Salisbury City Council, said she is “very proud of my city” that her sexuality was never an issue in her election campaign. She has been out for years.

“The thing about coming out is to come out in your own time,” she said. “Nobody should be outted.”

Tony Land’s coming out started when he was 21.

But when he came out to his mother and grandmother, they said, “It’s not our place to judge. Whatever you do, we support you.”

“I’m not just a gay man,” Land said. “I have a master’s degree. I’m an upstanding citizen. We deserve the same rights as everyone else.”

For Teri Lovo, life has been “a constant coming out.” As a young adult, she lived as a gay man but later realized she is transgender.

The transition to living as a woman took a number of years. She successfully fought the legal system for recognition of her marriage to a foreign-born man. She also described the challenges of running a business in Stanly County as a transgender woman.

“I just expect people to accept me,” she said. “If they don’t, they can move out of my way.”

Chip Palmer, who graduated from Pfeiffer University and now works there, was the youngest person on the panel. He talked about coming out at the age of 16. He said he feared he could be killed after he came out. His pastor asked him to leave his church.

Pfeiffer wouldn’t allow a gay/straight alliance when he went to the school there. “I’m very proud of how far Pfeiffer has come in my time here,” Palmer said.

“We are just people,” he said. “Being gay is just an aspect of who we are.”

Robin Whitley, who was snowed in in Boone, recorded a video presentation that was played at the forum. As a minister, she spoke of being “a person of faith.” When she decided to come out, her bishop asked her to leave. That motivated her to write “In a Southern Closet,” which examines the challenges of being a lesbian Christian.

“Being an ally to me means you’re committed to equality and speaking out against discrimination,” Keith said. “It’s important that we stay an inclusive community and support students wherever they are in their life journey.”

Tim Coffey is a board member of Salisbury Pride.

David Freeze: An easy traffic day leads to an evening in Tarboro

Editor’s note: Salisbury native David Freeze is running across the state from Murphy to Manteo. The Post is chronicling each... read more