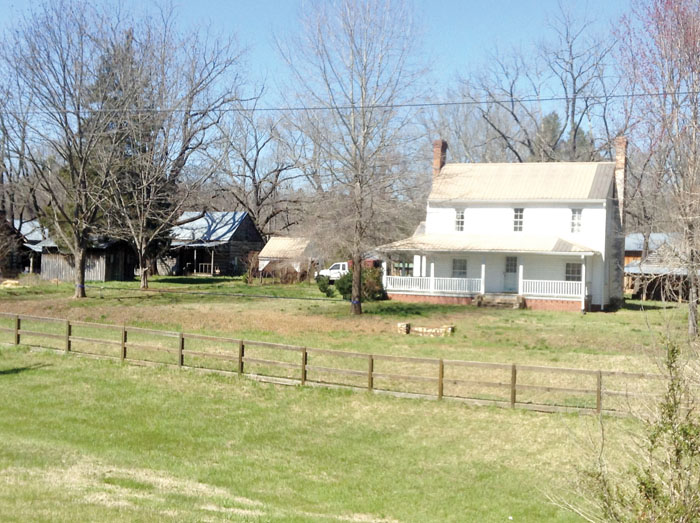 This house, probably from the late 1800s, and many log outbuildings were seen a few miles before Siler City. David Freeze/for the Salisbury Post

Nothing has been on my mind more than food the past few days. After eating everything I could find Wednesday night, I stopped back by Glazed King Donuts again Thursday morning and got breakfast from Sopha San.

All the display space was jammed full with doughnuts, and people were buying them like crazy. San gave me a box and put my four choices in it, not realizing that there was no place for the box on the baby jogger.

She hasn’t yet seen her picture at salisburypost.com but she promised to later.

After a perfect and restful night at the Motel 6 in Asheboro, I jumped back on U.S. 64 and continued east. It took almost four miles to get out of Asheboro and past its dozens of stoplights. Most of that time, I was walking with the back tire on the baby jogger rubbing the curb while turning sideways often.

Very few sidewalks and no shoulders in town made it tight but doable. Plenty of considerate drivers gave me room.

Once out of town, the Randolph County luck held up as the wide shoulders without the dreaded rumble strips reappeared. Traffic wasn’t heavy, and I enjoyed some pretty countryside that was virtually trash-free.

Randolph County does it right, slightly different from Chatham County where I ended the day. The paving isn’t as good here, and trash pickup isn’t either. But the wide shoulders remained all the way into town. I did pass through Ramseur, virtually all on sidewalks.

I had been tipped to watch for a big cemetery on the right just before Siler City because actress Francis Bavier, Aunt Bee of “Andy Griffith Show” fame, is buried there. I found her gravesite quickly because it has one of the largest gravestones.

Most interesting was the fact that people have left jars of pickles there, reminding me of the episode when Aunt Bee tried to make pickles. Andy and Barney couldn’t tell her how bad they were, so they just kept eating them.

Siler City was also mentioned in an episode when Andy and Helen got caught for illegal hunting and had to go there.

Just a mile or so farther was the western edge of the town, at least the part on U.S. 64. I had been checking for motel possibilities and happened to see one called Siler City Motor Lodge, very similar to the many throwback motels along Route 66. I called and got a very good price, even though none of Siri’s lists knew anything about it.

There are also a few others in town, including a Days Inn. I called there and got an extra high price and failed to get a better deal. The Days Inn was just 1.3 miles farther along, and I had already noticed sidewalks starting at this end of town. I will use those sidewalks to get an early start today, making up that 1.3 mile.

Another thing I noticed was Best Food Cafeteria and Haley Bales Steakhouse, all one place. Figuring to offset all the doughnut eating of the past few days, I went inside and Micah Boyd took time to tell me how things work at the cafeteria. She told me to just go take a look, exactly what I did. Even though the sign said “No takeout salads,” I got to do one.

One of the other girls said the magic words when she gave me the box: “Everything you can get in there goes for $7.46.” Since that price included peach pie, I was excited to load the box, and I packed it full. The salad was awesome.

I passed up the Days Inn and headed back to Siler City Motor Lodge. The room and price were perfect for me. The heat and everything else seemed to work fine, including the TV, since there was basketball to watch Thursday night.

After 24 miles Thursday, I was feeling less sore and stiff as with some of the longer days.

Just a few other interesting things helped me pass the time. I found 80 cents — three quarters and a nickel. Also along the side of the road, I saw a single nice shoe in Size 13 and, about a mile later, I found the other one. I bet there is a good story involved.

A house that I passed had a large Tweety Bird standing just inside the front door. I walked over to take his picture but he didn’t wave.

Today, I am heading for the east side of Cary and hope for more good roads. Finally, after a cold overnight, the high is supposed to reach the 50s with light wind. I’m ready.

Thanks for following along. The final third of the journey is just around the corner.

See you back here tomorrow.