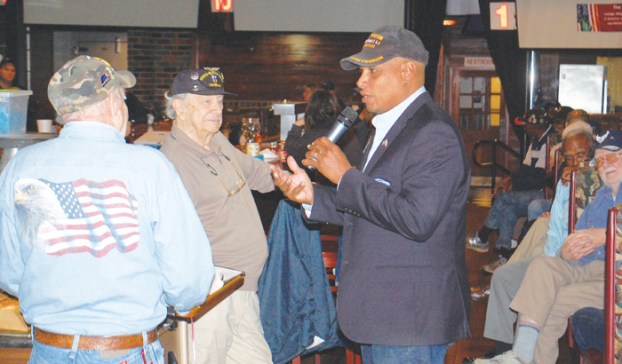 Why not a state hall of fame for military veterans?

SALISBURY — You may not have heard of David Broadie, but you should have.

Over the past year or so, he has been traveling across the state — sometimes even walking for days at a time — to drum up support for a North Carolina Military Veterans Hall of Fame. An Army veteran, Broadie is founder and chief executive officer of the organization, which goes by the same name.

Broadie says eight states have military veterans halls of fame. None of those has an actual hall of fame building for people to visit. Broadie’s ultimate goal is to have a 120,000-square-foot Hall of Fame built somewhere in Mecklenburg, Cabarrus or Union counties.

And he hopes that can happen within three years.

An inaugural induction ceremony for the Hall of Fame will be held at 7 p.m. May 19 at Crowne Plaza in Charlotte. The hall’s first class will have 22 inductees; 21 of those men and women are listed on the website at www.ncmvhof.org.

Broadie visited the Tuesday morning coffee shop for veterans at Thelma’s restaurant in West End Plaza. He reminded the generously sized crowd that all major sports such as baseball, football, basketball and hockey have halls of fames.

“We don’t have a hall of fame for veterans,” Broadie said. “My question to you is, why not?”

The sport halls of fame list the members’ athletic accomplishments and their stories — things that will “live long after they’re gone,” Broadie said.

But how are veterans remembered after they die? Broadie said it’s usually with a graveyard marker and a box of military memorabilia in an attic.

“We have great heroes in North Carolina,” Broadie said. “This is an opportunity to showcase their accomplishments.”

The three categories making up the qualifications for the N.C. Military Veterans Hall of Fame are valor, achievement and service. After this first class of 22, a maximum of 15 veterans will be inducted annually.

Bylaws dictate that no more than 10 be selected for valor and no more than five be chosen for the combined categories of achievement and service.

If Medal of Honor recipients are nominated, they are automatically inducted and can be in addition to the 15.

The “service” category reflects a veteran’s service to his or her community, state or nation after active duty. “Valor” relates to acts of valor in combat, and “achievement” represents extraordinary achievement while on active duty.

The N.C. Military Veterans Hall of Fame was incorporated in December 2016. A ribbon-cutting was held Aug. 3 in Charlotte, when Mayor Jennifer Roberts declared it the hall of fame’s day in the city.

That same month, Broadie said, he and four other veterans walked from Fort Bragg to Charlotte to bring attention to the hall of fame effort.

The trip covered 146 miles in four and a half days. “We believe in what we’re doing,” Broadie said.

In January, Broadie and other veterans walked from Raleigh to Charlotte — 179 miles in five and a half days, and that walk passed through Salisbury.

Broadie asked his audience in Salisbury on Tuesday to think how many students on field trips a N.C. Military Veterans Hall of Fame could reach and expose them to a military education that’s no longer being taught in schools.

“Where’s the bridge between our generation and the next generation?” Broadie asked.

One veteran suggested having a mobile hall of fame that could go across the state and serve as the kind of educational tool Broadie envisions.

Salisbury’s Tom Harrell said he would like to see veterans in general show what an economic engine they are and can be to the state. North Carolinas has some 800,000 military veterans who are a strong economic asset, though often overlooked as such, he said.

“We want to be a hall of fame that gives back, too,” Broadie said.

On a side note, Broadie said he is meeting today with the Charlotte-Mecklenburg Board of Education chairman and the mayor of Charlotte “to see how we can get veterans into schools.”

He said arming teachers with guns is not the answer to school violence. “They’re educators, not defenders,” Broadie said.

Military veterans are still available to serve their communities and country, and they could offer the manpower to “go into schools and protect our kids,” Broadie said.

Several veterans in the crowd nodded in agreement.

This is a photograph of the Catawba College Band in 1959. Joe Williams of Faith who provided this picture to... read more