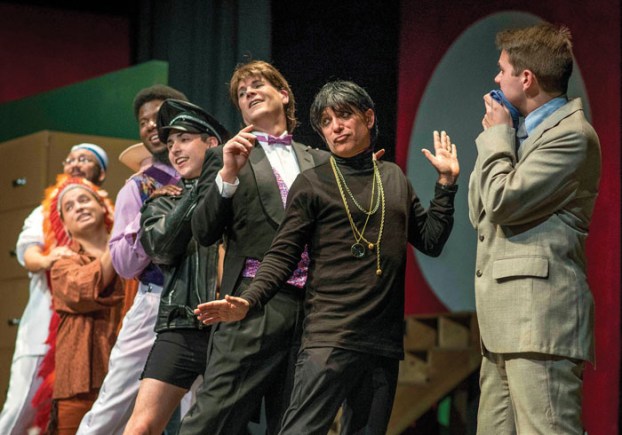 ‘The Producers’ will offend you, but you’ll be laughing hard

Fair warning: “The Producers” is tacky, tasteless, not politically correct, and the opening night audience laughed and clapped their way right though it.

It’s completely outrageous, shows a lot of leg and some rude hand gestures, and is slam-packed with sexual innuendo. And that’s just the way it is supposed to be.

Mel Brooks wrote the comic musical — music, lyrics and all — and he loved nothing more than to poke fun and be slightly off kilter.

Plot? Oh, yeah. A washed-up Broadway producer, Max Bialystock, is desperate for money. Really desperate. His last play opened and closed on the same day. His sex-starved little old lady backers have certain expectations, so it’s not hard to get money, but why can’t he find the right play?

In walks accountant Leo Bloom, a fresh-faced young man who still carries a security blanket with him. He has noticed Max’s books are a little fishy.

As he studies the problem, he remarks that Max could make more money by producing a bonafide flop. All he’d have to do is raise more than he needs, put the flop on stage, and then walk away — far way.

Leo realizes he has created a monster and tries to get away, but Max is very persuasive.

So they have to find the worst play ever written, which turns out to be “Springtime for Hitler,” a blatant homage to Hitler written by a German man (“I was NOT a Nazi”) named Franz Liebkind. Brien Lewis is the funny, wacky playwright and nearly steals the show in his hysterical scenes.

But Josh Wainright as Max and William McGinnis as Leo are so good on stage, you have to love them. Especially Leo, who’s quite cute.

The first person to audition is Ulla Inga Hansen Benson Yansen Tallen Hallen Svaden Swanson Bloom, a Swedish blonde who’s got all the right moves. She becomes their secretary and sets her sights on Leo.

For a director, Max wants Roger De Bris, a gender-bending transvestite with a reputation for being an awful director. Paul Reeves Leopard is up to the task, making Roger at once over-the-top and totally believable.

His trusted assistant is Carmen Ghia, played by Andy Abramson as you’ve never seen him before. So much pink and sequins!

It turns out the playwright, Franz, is the best person to play Hitler, but he literally breaks a leg on opening night, taking the old good-luck phrase “Break a Leg” a little too far.

Who can go on? No one better than Roger De Bris — he knows all the lines.

What happens next is truly astounding, with horrible musical numbers, costumes that include pretzels and sausages, lots more sequins and almost bare midriffs.

The musical numbers get more strange and ridiculous, and then, horror of horrors — it’s a hit!

This is when the action really picks up, with much shouting and plotting. It would be unfair to describe what happens in the end, but Hitler never looked so good.

So leave the kids at home. Mel Brooks is not known for being subtle. But you can enjoy the lovely choreography by Ashlyn Keller Silver, Reid Leonard’s minimalist set, and his direction of a cast of dozens.

You might be offended, but that’s part of the fun.

Producing partners for “The Producers” include Ed Brown, John A. Basinger and David Post. The play continues tonight and Saturday and March 21-24 at 7:30 p.m. at the Meroney Theater. There will be a 2:30 p.m. matinee Sunday.

The weekend probably won’t be a total washout, but we’ll have showers Saturday and Sunday night, with more on Monday... read more