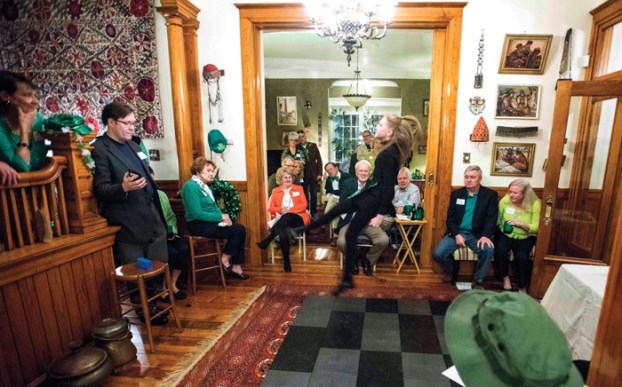 Rachel Newman performs Irish dances during a St. Patrick's Day-themed fundraiser for the Salisbury Symphony at the home of Will and Mary James on Friday night. Jon C. Lakey/Salisbury Post

SALISBURY — Irish step dancing dates back to 1750, and competing in the dance dates to the 1890s.

The dance is still popular, though, and Rowan County’s own Rachel Newman is a 12-year-old Irish dancer who has competed at the world level in Ireland.

Rachel is the daughter and only child of James and Karen Newman. When she was 7, she fell in love with both violin and Irish dance because of the family’s “Celtic Woman” CD. But there was a catch: The family was living in Paris at the time.

Karen Newman had a friend who had ties to the Irish Embassy. She gave her a call and asked if she knew of any Irish dancing studios in the area.

They were in luck. Even though it involved almost an hour of travel each way by metro, Karen signed Rachel up. And they’ve never looked back, five years later.

Rachel has traveled extensively for her hobby, throughout France and Germany and visiting Milan. Here in the States, she has covered North Carolina, South Carolina, Georgia, Florida, Maryland, Pennsylvania and New Jersey.

In 2016, Rachel danced in a regional competition called a feis (pronounced “fice”) in Baltimore. Her team placed second overall, and the teacher suggested the dancers try competing at the international level. They trained for six months and last April, they traveled to Dublin and competed at the world level.

Rachel has a total of 15 performances this week for St. Patrick’s Day in the Carolinas. She was on WCCB in Charlotte on Wednesday and will participate in the Charlotte St. Patrick’s Day parade. She takes dance classes at Connick School of Irish Dance, which has studios in Pineville and Huntersville. Connick is the Gaelic word for “awesome.”

Members of her dance team, which includes boys and girls, all study at the same school.

There are six levels of skill in Irish dancing, and Rachel is in the fifth. A dancer isn’t allowed to have a solo dress until reaching the third level. Solo dresses are handmade in Ireland and can cost as much as $2,000. Rachel now has her fourth dress.

“When I dance, I feel heavy,” Rachel says. “I have to wear a wig, and the dresses have crystals and gems on them. I always have butterflies until I get started; then I enjoy myself.”

Because she lived in France for three years, Rachel is fluent in French. She has a French tutor by Skype to maintain her fluency and broaden her usage.

That love of Irish dance and fiddle from that CD also led to violin classes. She studied with an American violin teacher in Paris, and here she studies with Marguerite Keller. Rachel plays the song “Mockingbird” for her mom every day.

“It’s been nice to hear how it has evolved over time as her skill has increased,” Karen says.

Rachel likes to tease her mom by improvising in the song or mixing up the timing. “Just to keep it interesting,” she says.

Outside dance and violin, Rachel is a normal 12-year-old. She hates bugs, loves to read – “Mysteries are my favorite”— and dreams of being a marine veterinarian when she grows up.

“In Orlando, we came upon the most glorious creature to ever swim the planet, the manatee,” she says.

She would like to achieve the next – and final – level in dance.