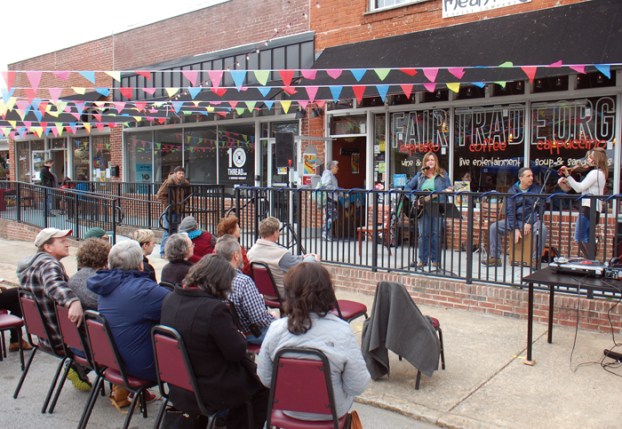 It’s not every day that you see people doing yoga in the middle of Fulton Street. Yet a number of people did so on Saturday as Mean Mug coffee shop invited the public to help celebrate its third anniversary.

SoFul Yoga & Wellness was just one of several local groups joining in to make it a special day — not just for Mean Mug, but for the whole neighborhood there on South Fulton Street across from Chestnut Hill Cemetery.

Three years is not long in a town with several businesses that have passed the century mark, but Mean Mug is a powerful example of how one good thing can lead to another. Nearby are a bread shop called Better Loafing and the Happy Roots Arts Collective. Around the corner, Maggie and Jody Blackwell are turning an old church building on Ridge Avenue into a music venue, “Beacon Hall.”

The driving force behind all this activity has been Guatemala native Evelyn Medina, who came to America in the summer of 1976 when she was 7 years old. In Los Angeles, she reunited with her mother, Maria Guzman, who had come to the country in 1970.

Evelyn came to Salisbury in 2001 on a business venture that didn’t pan out. But she fell in love with the area — even mailing colorful fall leaves to relatives in California.

She and husband Rigo, who runs his own construction company, opened Mean Mug in March 2015.

“It’s an immigrant story,” Evelyn said in 2015, as the coffee shop prepared to open. “Small little family from Guatemala, and here we are so many years later running two businesses and successfully raising our two little kids.”

And creating community — a community that is happy to join the Mean Mug celebration.

President Trump’s critics, who include many establishment Republicans, are finding themselves left with few issues given the president’s recent string... read more