Women at the center of Mean Mug’s newest art exhibition 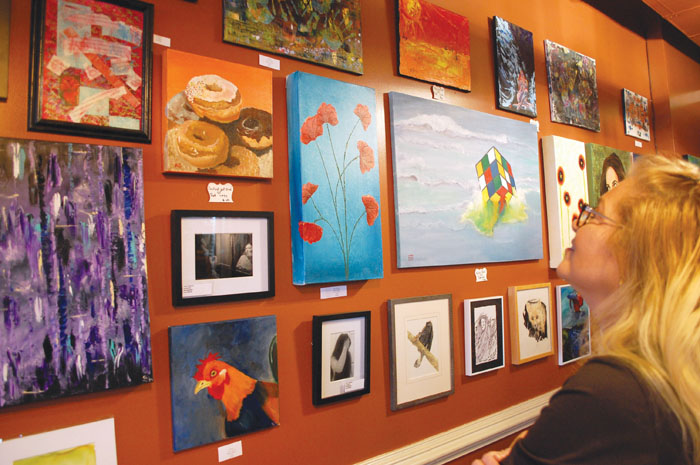 “We’ve had art on our walls before from local artists, but we had never set out to do a proper art show,” Medina said. “And being that this is March and we’re celebrating women, we thought it would be appropriate to make it an all-women show.”

This is Ochoa’s first formal art show in the United States, Medina said.

Ochoa has lived in Salisbury for 17 years and has worked in the kitchens of La Cava and Shuckin’ Shack. She said she expresses herself through poetry and painting.

“This one I painted when I was really angry,” Ochoa said as she pointed to her painting called “Facinacion,” which features a woman in front of a purple ocean.

Hartsell said some of the artists featured in the show didn’t even think of themselves as artists before being asked to contribute.

“Some (pieces) have been in closets,” Hartsell said.

Others, like the works of Carol Dunkley and Patt Legg, have been displayed elsewhere in Salisbury.

McHugh, who both performs music and creates visual art, has 10 pieces at the show that features a unique medium — alcohol ink on synthetic paper.

Each of the pieces on display from the approximately 12 artists is for sale. McHugh said they will be on display for about three months.

But once Galang got there, she was drawn to the many types of visual art that cover Mean Mug’s walls.

“I love the artwork. It’s amazing,” Galang said. “It’s fascinating what people see. This is how they interpret life.”

Galang said the fact that it is an all-women show makes it “even better.”

Medina said she’d always imagined Mean Mug as a place where the community could create and celebrate different types of art.

“You know, musical art, poetry, storytelling — which is very important and close to my heart — and, of course, paintings,” Medina said. “I am not, by any measure of the imagination, an artist in the medium of paintings. So it’s not as accessible to me. So it’s been a real blessing to have Isabel here (to) come and fill that gap that I feel has been in the store for a while.”

Since Hartsell started as manager about two months ago, she has been making an effort to curate art rather than simply display it on Mean Mug’s walls.

Medina said she plans more exhibitions with different themes and focuses in the future.

“We’re going to rotate the art maybe every month or month and a half to feature different artists,” Medina said. “We’ll be showcasing them, whether it’s the artist or a particular group of people.”

McHugh said the next show will be “the flip side” of this one — a show featuring male artists.

David Freeze: Goals made with rain, snow, animals and…