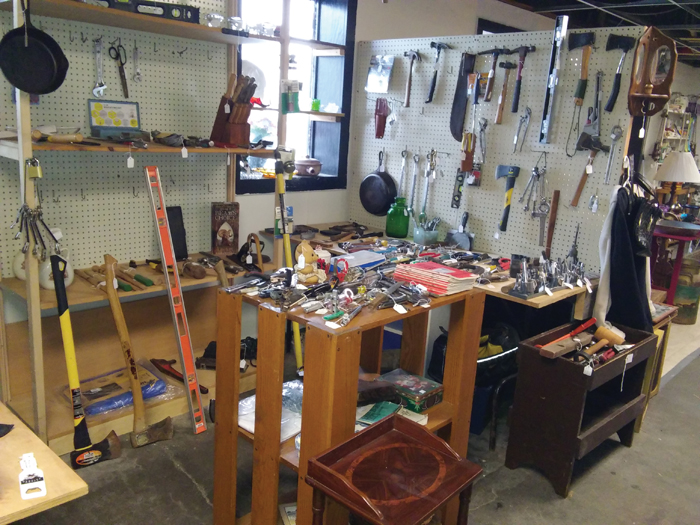 A booth at Anything Enterprises dedicated to selling tools. (Submitted by Bill Hustead)

SALISBURY — After 10 months at a location that owner Bill Hustead said was too small and difficult for customers to navigate, Hustead has moved his variety store — Anything Enterprises — about 10 blocks down Mooresville Road.

“I (used to have) to rent a storage building next door to put the bigger things in. Now I have everything inside,” Hustead said of his new 2,400-square-foot store.

The new location is at 900 Mooresville Road and is near the intersection with Jake Alexander Boulevard West.

Hustead said the store’s proximity to a traffic light has made it a “fantastic” location.

“People stop at the traffic light, and they see it and they can turn in,” Hustead said.

Hustead, who has been an on-and-off resident of Rowan County for years, said he has almost always worked in retail — from the time he sold Charles Chips door to door as a young man to owning Anything Enterprises.

He said his favorite part about retail is the people he gets to meet.

“There are new people every day, and they come from all kinds (of places),” Hustead said.

Hustead’s partner, Donna Wingler, said they have had customers from the Virgin Islands, Japan and Scotland.

“They come in when they’re here in town,” Hustead said. “They’ve gone back home, and they’ll come again.”

He said the consigners sell everything from items made of High Rock Lake driftwood to military memorabilia to children’s clothes.

The store also has four booths that sell jewelry, one booth that sells homemade potholders and one dedicated to selling tools.

Hustead also sells his own items, which vary from glassware to lawnmowers to fishing reels.