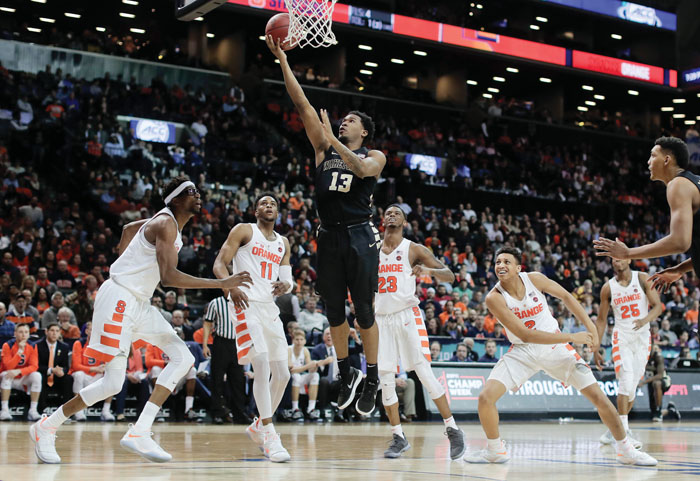 NEW YORK (AP) — Took a few tries for Syracuse to win a game in the Atlantic Coast Conference Tournament. With that hurdle finally cleared, the Orange can now focus on bigger postseason aspirations and the critical test on tap.

Freshman forward Marek Dolezaj scored a career-high 20 points and the Orange beat Wake Forest 73-64 on Tuesday night to reach the second round.

Syracuse had plenty of New York City success in the Big East Tournament over the years but had been 0-3 in ACC postseason play since switching conferences.

“I thought our defense really was the difference,” coach Jim Boeheim said. “They’re a very, very good offensive team, and I thought we got them off their spot.”

Tyus Battle had 18 points and Paschal Chukwu added 14 points and nine rebounds as all five starters scored in double figures for the 11th-seeded Orange (20-12), hoping an impressive performance in Brooklyn will get them off the bubble and into the NCAA Tournament.

“We had a great strength of schedule this year, much better than last year. We didn’t win on the road last year; we won on the road this year. So we’ve done some good things,” Boeheim said. “We’ve proven that we can compete with anybody.”

Next up, the Orange play Wednesday night against 12th-ranked and sixth-seeded North Carolina, the defending national champion.

“We’re confident against anyone we play. I don’t care who it is. We hung in there with some of the best teams in the country, and when we’re on the floor 1-on-1 with them, we’re confident we’re going to come out with the win,” Battle said.

Bryant Crawford scored 22 points for No. 14 seed Wake Forest (11-20). Normally dangerous from long range, the Demon Deacons went 6 for 29 (20.7 percent) on 3-pointers against Syracuse’s signature 2-3 zone and never led in the game.

Playing in its home state, Syracuse had the benefit of partisan support on a neutral court, with many of its chanting fans in a crowd of 10,612 decked out in orange.

“We came out flat,” Crawford said. “They came out with way more energy than us.”

Frank Howard had 11 points, five rebounds, five assists and three steals for Syracuse, which snapped a three-game skid Saturday with a 55-52 victory at home against then-No. 18 Clemson. Oshae Brissett added 10 points, on 2-of-11 shooting, and nine rebounds.

Wake Forest was down 19 with under eight minutes remaining but shaved the deficit to six on two free throws by Brandon Childress with 1:24 left. Dolezaj tossed an alley-oop to the 7-foot-2 Chukwu for his second consecutive dunk, and his blocked shot at the other end led to two foul shots by Brissett that made it 68-58 with 1:04 remaining.

Dolezaj scored Syracuse’s first five points after halftime, and a 3 by Howard started an 11-0 run that gave the Orange their largest lead, 56-37, with 8:12 remaining.

“I didn’t think our bigs rebounded the ball well enough,” coach Danny Manning said. “Our bigs have to have more of a presence on the glass.”

Wake Forest: Lost its final three games of the season and seven of its last nine. … Dropped to 1-7 all-time against Syracuse, losing two of three matchups this season.

Syracuse: Needing to win and knowing he has a thin roster, Boeheim didn’t make a second-half substitution until Battle fouled out with 32.8 seconds to go.

Wake Forest: Returns three starters next season, including Crawford and 7-foot-1 Doral Moore, and all its key reserves without losing a player who averaged more than 8.8 points per game.

CHARLESTON RALLIES TO NCAAS WITH 83-76 OT WIN OVER HUSKIES

NORTH CHARLESTON, S.C. (AP) — College of Charleston coach Earl Grant never doubted his team would cut down the nets at the Colonial Athletic Association championship and return to the NCAA Tournament for the first time in 19 years.

“We didn’t realize we’d have that much adversity” on the way to the title, a smiling, relieved Grant said.

Joe Chealey had 32 points as the top-seeded Cougars rallied from 17 points down in the second half to win the CAA title with an 83-76 overtime win against Northeastern.

It certainly was an amazing comeback for a team that looked cooked early in the second half, down 42-25 with less than 18 minutes left and struggling to find any offensive rhythm. Yet an hour later, fans mobbed the Cougars at the North Charleston Coliseum in celebration.

“I was crying my eyes out so I didn’t really get to see it,” said Chealey, a fifth-year senior

Now, it’s off to the NCAAs, where Charleston hasn’t been since 1999 when then-coach John Kresse built the Cougars into a yearly mid-major threat with four trips to the Big Dance from 1994-99. The school’s most successful run came in 1997 when it knocked off then-ACC power Maryland before falling to eventual champion Arizona.

Grant believes his team might have another such run in them.

After rallying to tie, the Cougars caught fire in the extra period. They hit their first four shots, including a pair of 3-pointers by Marquise Pointer to take a 75-69 lead. Northeastern (23-10) could not come back.

Charleston got the ball back with the chance to win in regulation, but Chealey’s long 3-pointer hit off the front of the rim.

Jerrell Brantley gave the Cougars their first lead of the game, 67-65, in overtime before Pointer’s first 3 gave Charleston the lead for good. Two minutes later, Pointer did it again as the large, loud crowd at the North Charleston Coliseum exploded in delight.

Northeastern’s last chance disappeared when Pusica lost the ball out of bounds on a drive with 40 seconds to go.

“I thought we had a winning effort,” he continued. “We had our chances. We lost our composure a little bit at a couple of key moments. Obviously, we’ve got a lot of emotional players in the locker room.”

Grant Riller scored 20 points for Charleston, 14 of those after halftime. Brantley finished with 18.

Northeastern: The Huskies were poised and prepared in the opening half, but fell apart after the break. They turned the ball over 15 times in the second half and overtime to fuel Charleston’s rally.

College of Charleston: The Cougars finally closed the deal after missing out a year ago in their first CAA Tournament finals in their home city. A team that appeared flustered and out of sync the first 22 minutes turned up the pace and ran past Northeastern.

Grant, in his fourth season, grew up a few miles away from the arena. He said the past few days he jogged about four miles to his old neighborhood, channeling the good vibes from his community for the Cougars to make a winning tournament run. “Last year, I jogged it and stopped at three miles,” he said. “I thought, ‘We’ve got to go further,’ so I went all the way in. It’s good to feel the energy of this city.”

Coen said the big, pro-Cougar crowd had an effect on the Huskies. “The building got loud. I tried to quiet it down with a couple of time outs,” he said. “We knew that they were going to make a run, we were just hoping we could withstand it.”

Bill Murray, the comic actor and sometimes Charleston resident, was among the crowd rooting home the Cougars. He jumped and cheered with Charleston fans and had a big smile on his face when the Cougars took the title.

Murray is a frequent visitor to local sporting events and wore a Charleston RiverDogs cap. Murray is part owner in the Class A baseball team.

Northeastern, which shared the regular-season crown with Charleston, will see if it will get an invite to a postseason tournament.