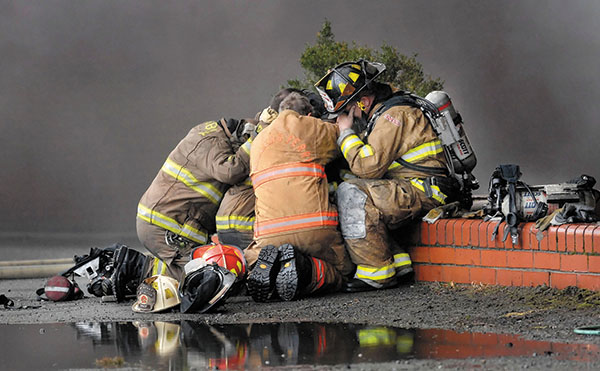 Firefighters pray and mourn together after word spread that two firefighters had died fighting a fire at Salisbury Millwork on March 7, 2008. Photo by Jon C. Lakey, Salisbury Post.

So much intense, burning heat.

The scene inside Salisbury Millwork on March 7, 2008, is unimaginable to anyone who was not there. The tragedy the fire wrought is all too real, though.  An interior wall collapsed, trapping the firefighters battling the blaze from within. Two died — Vic Isler and Justin Monroe.

Salisbury must remain steadfast in its commitment to the highest safety standards and best equipment for its fire department. The painful lessons learned 10 years ago cannot be forgotten.

Firefighters will tell you there’s little chance of that.

Batallion Chief David Morris described the day his two comrades fell. “We felt responsible. We felt empty,” he told the Post on Wednesday. “They put us on a bus to go back to the fire station with two less people.”

The city remembers these fallen heroes with a ceremony each year. Firefighters honor Isler and Monroe by following daily practices that, if used in 2008, might have prevented their deaths. Checking equipment. Testing radios. Keeping batteries charged. Communicating clearly. Following improved policies and procedures.

After the fire, federal safety officials inspected every firefighter’s actions and equipment — “every stitch that we wore,” Morris said. A 27-year veteran of the department, he said crews did so many things right; he wished the safety experts could have identified one thing to blame for the deaths. Instead, they pointed to many little things. As one firefighter told Morris, it was a case of snowflakes adding up to an avalanche.

In the end, OSHA levied a $6,563 fine on the Salisbury Fire Department and a $700 fine against Locke Fire Department,  which had three firefighters suffer injuries as they tried to rescue Isler and Monroe.

Many firefighters made heroic attempts that day, Morris said.

Paying close attention to details makes all the difference, Morris said. Don’t accept communication failures as normal. Take care of kinks in hoses. Organize resources. And so on. That message and other lessons from the millwork fire have been shared with area fire departments and beyond.

The city’s continued support of topnotch equipment and training for the Fire Department is essential. “Our commitment,” Morris said, “is that we make sure everyone goes home safe and has the opportunity to return to their family.” That must be Salisbury’s commitment, also.