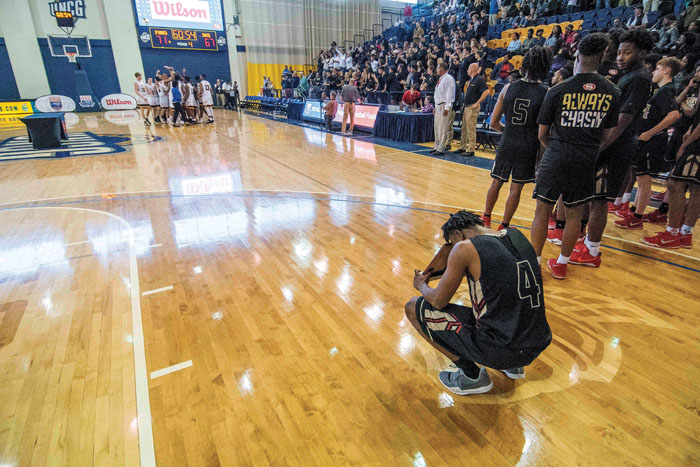 JON C. LAKEY / SALISBURY POST Salisbury senior guard Trell Baker (4) rests his head on the state regional runner-up plaque as the Forest Hills players celebrate their victory at the other end of the court.

GREENSBORO — Depth gave the Salisbury Hornets a chance against a talented opponent in Saturday’s 2A regional final at UNC Greensboro.

It still wasn’t enough. Four of Forest Hills’ five starters enjoyed superb days and the Yellow Jackets beat the Hornets, 71-67, in a wall-to-wall struggle that rarely paused for a breath. Fourth-seeded Salisbury had its second straight season ended by No. 2-seeded Forest Hills, which beat the Hornets in the second round a year ago.

“I’m not going to say that’s the best team we’ve played all year because I really believe we would have won if we’d played our best,” Russell said. “But they probably did match up better with us than anyone else has.”

Senior guard Trell Baker scored 19 for the Hornets. Rogers had 12, while Kesler scored 11. Russell, a junior, scored eight. He joined Baker in the postgame interview room because of the leadership role he took on during the season and in Saturday’s game.

Forest Hills was bigger and more skilled offensively, but it’s hard to quantify feistiness, and Salisbury always brings a truckload of that commodity. The relentless defensive energy displayed by Russell and Gill was startling to behold.

The Hornets were a modest 15-8 a year ago when they had a lot more size, but this team played harder and played better together. That’s why these Hornets finally bowed out with a 27-4 record. Only three Salisbury teams, in a long and proud  program history, have won more than 27.

“There’s a lot of dog in us,” Salisbury coach Bryan Withers said. “There was a lot of fight in this team.”

Withers was a key man on the 1986-87 and 1987-88 Salisbury teams that went 30-2 in back-to-back seasons. Salisbury hasn’t played  in a state championship game since Withers, Fred Campbell and their teammates demolished Farmville Central, 63-45, for the 1986-87 2A title. The timing seemed right for the Hornets to return to the biggest stage, especially after they eliminated top-seeded Mountain Heritage on the road, but Forest Hills (29-2) had other plans.

Forest Hills had lost in the regional final the past two seasons and was determined not to be denied again. Now the Yellow Jackets are in a state title game (against Greene Central)  for the first time since 1964.

“Our guys having been in the regional final the last two years, that helped us, especially early,” Forest Hills coach Matt Sides. “We were ready to play basketball from the start, but it took Salisbury a while to settle in.”

Forest Hills took advantage of Salisbury turnovers and led 6-0. Then it was 9-2. But after Withers’ first substitution, the Hornets started scrambling back.

“We had the size,” Sides said. “But Salisbury plays so physical and puts so much pressure on you. It was a fight. We knew it would be.”

When Baker made two free throws with 1:49 left in the first quarter, the Hornets were back to 14-all. Then the Jackets spurted again, and with the help of a lucky bounce high off the rim on a 3-pointer, took a 23-18 lead after a quarter.

Forest Hills appeared to be sprinting toward  separation in the second quarter and opened a 10-point lead. But Kesler made two free throws and dished to Rogers for a tough finish. When Gill  suddenly dashed and slashed to the rim for a three-point play, Salisbury had fought its way back into it for the second time. Forest Hills led 40-37 at halftime.

McLaughlin, the senior point guard, was key for Forest Hills in the first half.  Normally he runs the show, but he was looking for his shot and scoring on ferocious drives and soaring put-backs.

“Salisbury was hugging our shooters,” McLaughlin said. “I had to be aggressive to try to open things up for them.”

In the third quarter, an Elijah Moss 3-pointer energized the Hornets, and Salisbury grabbed momentum. Forest Hills appeared to be tiring, missing dunks and missing layups.

When Rogers, a 6-foot-3 senior, got loose inside with 1:12 left in the third quarter, it was 49-all.  When Rogers flipped in another two in the paint moments later, Salisbury led for the first time all afternoon.

“I had the mindset that I was going to do whatever the team needed me to do to win this game,” Rogers said.

“We were using our speed, getting out in transition, finally playing our game,” Baker said.

At 51-all, Gill turned a steal into an acrobatic two with 7:19 left to play. That would be the Hornets’ last lead. Forest Hills had a flurry. Blakeney overpowered the Hornets for a three-point play, Tyson broke away in transition. Belin finished a fierce drive.

With the Hornets down 61-55, and reeling, Baker stepped forward with a three-point play with 4:41 remaining. But Tyson is a scorer — over 1,500 career points as a junior — and his answer was awesome. His creative, running scoop from 15 feet put Forest Hills on top, 63-58.

The Hornets kept coming. It was Rogers again to cut Forest Hill’s lead to 63-62. That set the stage for the game’s biggest shot by Belin.

The Yellow Jackets had not shot 3-pointers well all day and probably had done the Hornets a favor every time they launched one. But Belin was wide open at the top of the key and he calmly measured his shot, almost like he was taking a free throw. He hit nothing but the bottom of the net. A precarious one-point Forest Hills lead swelled to four.

“I was open,” Belin said. “I didn’t really think about it. We’re supposed to shoot when we’re that open.”

After several misfires, the Hornets were still in a four-point hole with a minute left. They also had so few fouls that they had to  chase and foul three times before they could put Forest Hills on the free-throw line.  With 33 seconds left, Belin stepped to the stripe and swished two, and the Yellow Jackets led, 70-64.

The final points of Baker’s remarkable, 1,000-point career came flying out of the left corner to cut Salisbury’s deficit to 70-67, but when McLaughlin made one of two free throws with 21 seconds left, it was a two-possession game.

Salisbury lost a potentially valuable possession with nine seconds left because of a fatigued mental mistake, but at that point, the chances of yet another comeback were slim.

Salisbury shot a solid 49.2 percent from the field and a respectable 5-for-16 on 3-pointers. The Hornets battled evenly on the boards, but they only got to shoot five free throws.

“Our defense just wasn’t quite as sharp as it usually is,” Withers said. “We made more mistakes today than we usually make.”

It goes in the books as a valiant effort to cap a fantastic season that caught just about everyone off guard.

“We played hard today, but that was the norm for us,” Withers said. “I’ve never had a team play this hard for an entire season.”