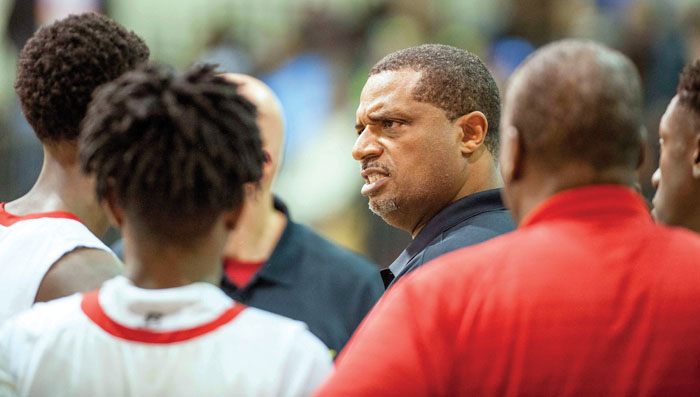 JON C. LAKEY file photo/SALISBURY POST ... Salisbury coach Bryan Withers, right, during a timeout on Dec. 29, in a Christmas tournament game against North Rowan. Withers has his Hornets in today’s 2A West regional final against Forest Hills in Greensboro.

SALISBURY —  Salisbury’s boys basketball team has been a surprise, to say the least.

The Hornets were only a decent 15-8 squad last season, and then they subtracted 6-foot-6 Tre Oats, a first-team all-county player. They also subtracted shooter Will Leckonby, successful as a freshman at Guilford College, and they subtracted the aerial acrobatics of springy forward Zae Harris. About 1,900 career points left with that trio.

On paper, the Hornets really aren’t as talented as last year, but here they are with a 27-3 record and taking on Forest Hills (28-2) at noon today for the regional championship at UNC Greensboro’s Fleming Gym.

Salisbury is two wins from a 2A state title. Did anyone really see that coming?

“I thought we could be pretty good, better than some people thought, and I thought we’d be able to compete for a spot near the top of our league (Central Carolina Conference),” Salisbury coach Bryan Withers said. “But did I think we’d be able to handle our league the way we did — to win the CCC by four games? No, I did not. There were very good teams in our league.”

It’s not like Salisbury suddenly added fantastic freshmen or benefited from major transfers. Most of the strides have come from within, as Withers, a star on Salisbury’s 1987 state champs, and his staff have coaxed improved, team-first performances from returning players. Guard Trell Baker, second team all-county a year ago, has blossomed into a serious star, while role players Bill Fisher, Oshaun Robinson, Cameron Gill, Elijah Moss and Jaquan Davis got better. The new faces are led by sophomore Xavier Kesler, junior Jahbreal Norman and senior Lonnie Rogers.

Baker averages 15 points but he gets more whenever it’s needed. No one else on the team averages as many as 11 points. It’s definitely a committee approach to offense, but those fives and sixes do add up, and the Hornets average a respectable 72 points per game. They put up 96 in the second-round playoff game with East Rutherford and 85 in the third round against Hendersonville.

“There’s been adversity for this team this season, but we came through all of it, and everything we went through just made us stronger,” Withers said. “Guys learned to play with each other and they learned to play for each other, and when you’ve got that mentality, when no one cares who’s doing the scoring, you can do some good things.”

Baker, Rogers, Gill and streaky 3-point shooter Moss scored in double figures Tuesday when the Hornets went on the road and beat Mountain Heritage, 70-56. Mountain Heritage boasted a 22-game winning streak and was the No. 1 seed in the bracket.

A lot of Hornets are capable of a big night. Fisher had a 25-point game this season, while Rogers had  a 24-point game,  Robinson has scored as many as 19, while Moss and Kesler have poured in as many as 18.

“I think we’ve been difficult to scout and tough to prepare for,” Withers said. “We get production at different times from a lot of  different guys.”

One thing that can’t be underestimated is how well Salisbury defends as a team. Teams get harried and rushed by the Hornets. They shoot lower percentages against the Hornet  than they’re used to, and they commit more turnovers than normal.  Salisbury allows only 55 points a game despite generally playing at a furious pace.

Forest Hills is 3-0 against Salisbury in playoff games in the last 13 years.

Forest Hills beat the 2006-07 Salisbury team led by Doug Campbell and Joe Allen in the playoffs and also beat the 2004-05 Hornets led by Campbell, Scotty Robinson and Channing Powell.

The most relevant playoff matchup between the schools is the one that occurred last season in the second round. Forest Hills overcame 25 points by Baker and a huge night by Oats to edge the Hornets, 81-79.

“Maybe that helps our guys some that we saw them last year and they know who they’re playing,” Withers said. “But these are different teams. We’ve both got new faces.”

Forest Hills has won 102 games the last four seasons, ran the table in a relatively weak Rocky River Conference and is in a regional final for a third straight year. Forest Hills fell to North Surry in the regional final last year and to East Lincoln two years ago. So this is not only a very experienced team, it’s a team with a ton of experience on big stages.

Tre Belin, a 6-3 junior, averages 11.4 points and 6.4  rebounds, He has 3-point shooting range and he’s enough of a high flyer to change shots defensively. Jaleel McLaughlin, a quick 5-9 senior guard, runs the show. Jamylan Blakeney, a 6-7 freshman, is the man in the middle.

Sophomore Josh Owens (6-3), senior Keshawyn Tyson (6-2) and senior Cam Richardson (5-7) are certain to get minutes off the bench.

“Forest Hills is very athletic and they’re very good,” Withers said. “But what separates them from other teams we’ve played is how well they shoot the ball. They can really shoot it. They’ve got kids who will just pull up and take a jumper with a whole lot of confidence.”

That sounds scary, but don’t expect Salisbury to game-plan drastic changes on defense or offense. The Hornets have gotten to this point by doing what they do, and Withers said they’ll be ready for the challenge.

NOTES:  Today’s winner will take on the Eastern Regional champ next Saturday for the 2A crown. That will be the Clinton Dark Horses (27-1) or the Greene Central Rams (25-6). … The parking garage is right across the street from Fleming Gym.  There is no parking charge. Tickets are $9.  Only NCHSAA level passes will be accepted.