Effort, desire and craftsmanship took the Hornets on deep run 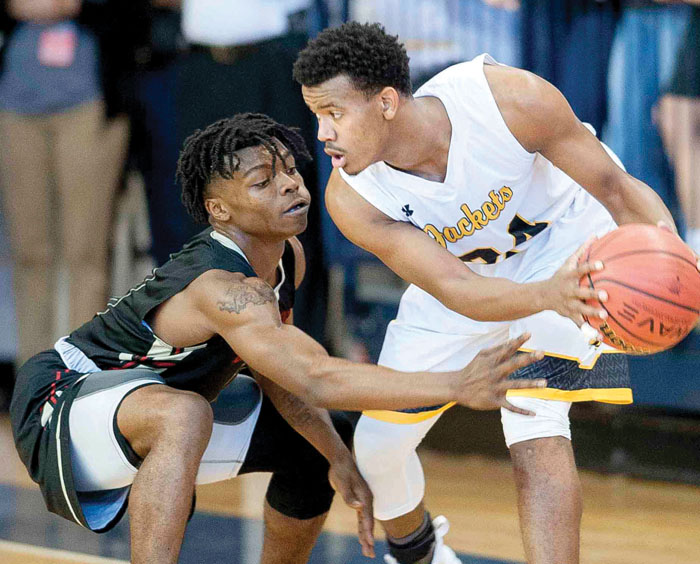 JON C. LAKEY / SALISBURY POST Salisbury's Jabreal Russell (11) reaches in for the ball on Forest Hill's Nasione Tyson (24). The Salisbury Hornets fell 71-67 to the Forest Hill High School (Marshville) on Saturday afternoon in the Western Regional of the NCHSAA state 2A championship held at UNC-Greensboro. Saturday, March 3, 2018, in Salisbury, N.C.

GREENSBORO — So this is where the journey ends for Salisbury’s Always-Chasin’ boys basketball team.

This is where Coach Bryan Withers and the over-achieving Hornets learned that all that glitters in February isn’t necessarily gold in March, where the team that finally made us stand up and take notice was obstinately erased from the 2A post-season picture.

Where all the effort, desire and craftsmanship it took to advance five rounds deep was tucked into school history, its place marked forever.

“This team …” Withers declared downstairs at Fleming Gymnasium, his words hanging in the air just moments after Saturday’s season-ending loss to Forest Hills. “They were all resilient. They’d get down eight and fight right back. They’d get down seven and come right back again. That’s who this group is.”

Of course, it had to be that way. And when Salisbury’s headline-grabbing 27-4 season ended, it wasn’t by a knockout, but by narrow decision. It didn’t close with another late-season exclamation point — as it had hoped — but with an untimely pause.

“Our whole team isn’t taking this loss well,” junior Jahbreel Russell said. “But now we know what it takes to chase a ring. We know how much passion, how much work it takes. Hopefully, the people coming back will learn from our mistakes.”

There were a few of those — most notably an inexplicable turnover by senior Lonnie Rogers with 9.8 seconds to play. It may not have mattered anyway, but Salisbury trailed by four points when the 6-3 forward, who harvested 12 points and five rebounds from 15 frantic minutes, rebounded a missed free throw and lazily flipped a bounce pass to an official standing out of bounds. “It was the front of a one-and-one,” said Forest Hills junior Nasione Tyson. “He probably didn’t hear the referee and thought it was a shoot-two situation.”

Withers tried to field the blame for the brain-freeze.

“Just a mistake,” he said. “As coaches, we have to make sure our players are aware of that situation. That’s just focus. Some of the guys haven’t played a lot. We showed some inexperience today.”

Forest Hills, heartbreak losers in this round the past two seasons, displayed its signature fortitude after the Hornets wiped out a 10-point, second-quarter deficit and took a 53-51 lead on Cameron Gill’s twisting layup from the left side with 7:19 to play. “Well, the last couple years, we got here and just kind of fell in,” Tyson said. “We couldn’t get the job done. Today, we worked for this moment.”

They did it by road-blocking the lane and creating havoc on the perimeter, which irritated but failed to stifle the Hornets.

“(Salisbury) played with a tremendous feistiness and scrappiness,” said sixth-year Forest Hills coach Matt Sides. “Whenever we got on a run, they’d respond with a run. But we kept fighting and didn’t hang our heads. That’s when it took to win this type of game.”

Did it ever. Consider that Salisbury was within 63-62 with two minutes to play, but that was before Trey Belin iced a 3-pointer from the top of the wheel — a high-arcing rainbow that seemed to originate on the concourse. “Huge, huge shot,” said Withers.

“They screened us pretty good on that play,” added Trell Baker, Salisbury’s 5-9 dynamo who spent most of the post-season zig-zagging through traffic like a Porsche on an L.A. freeway. “We just couldn’t get around it and he was open for the shot.”

When Forest Hills teammate Jamylan Blakeney muscled inside for a pump fake and layup 30 seconds later, the Yellow Jackets surged ahead for good. Afterward, Withers used his sincerity and charm to put a positive spin on the day — and a season that far exceeded anyone’s expectation.

“We hate that we lost,” the coach said, a smile stretched across his broken heart. “I hate losing more than I love winning. But, to see what they’ve done as people and young men — and all the adversity they overcame — to come to where they are, I’m proud of them. They fought through every single thing and kept chasing.”

They did, all the way to the fifth round. And that’s worth celebrating.