The view from abroad on guns 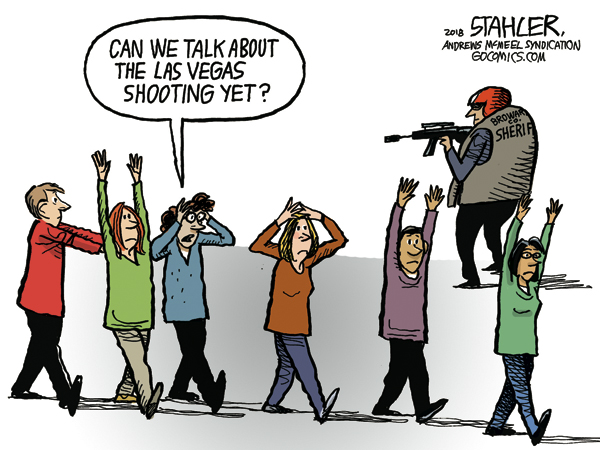 From an editorial in The Telegraph of London, about the massacre at the Marjory Stoneman Douglas School in Florida:

A great deal of effort has gone into identifying common traits between separate killers — mental health, narcotics, extremism — but the single linking factor is, of course, the use of guns.

The U.S. is awash with weapons. To some they are a persistent danger, to others a constitutionally protected way of life. What must be painfully obvious to all is that they part of a culture of violence that desperately needs to be addressed.

There’s a tendency in Britain to ask “why not just ban all firearms”? The proposition is both unrealistic and unreasonable.

For good or ill, the freedom to bear arms is guaranteed in the U.S. Constitution, and some Americans are so enthusiastic about exercising this right that it’s estimated there are now more guns than people. Ban guns, say the lobbyists, and only the innocent will obey the law, putting them at the mercy of armed criminals.

Why not regulate guns to limit firepower and cease sales to those who should not have them? Some regulation is ineffectual: several killers passed background checks and owned their guns legally. Efforts in Congress to go further have repeatedly fallen foul of partisanship.

Many liberal politicians have given up, concluding that the gun control debate is a cul de sac that drains energy without actually achieving anything. Pro-gun activists are held up as heartless villains, but such a narrow apportion of blame ignores the complexities.

The U.S .is shaped by a centuries-old frontier psychology. Its welfare system offers scant help to the mentally ill. Its schools are depersonalizing. Its young are prey to fantasies of empowerment through violence.

When Al Gore, then vice-president, spoke in the wake of the 1999 Columbine High School massacre, which seemed to open this historic cycle of violence, he cut across the partisan divide by addressing both gun control and the importance of fostering character: “We must replace a culture of violence and mayhem with one of values and meaning.”

Success implementing this in the years that followed has been negligible. The Trump administration has promised action to enforce the law, which hopefully begins a long, hard journey that America needs to take.