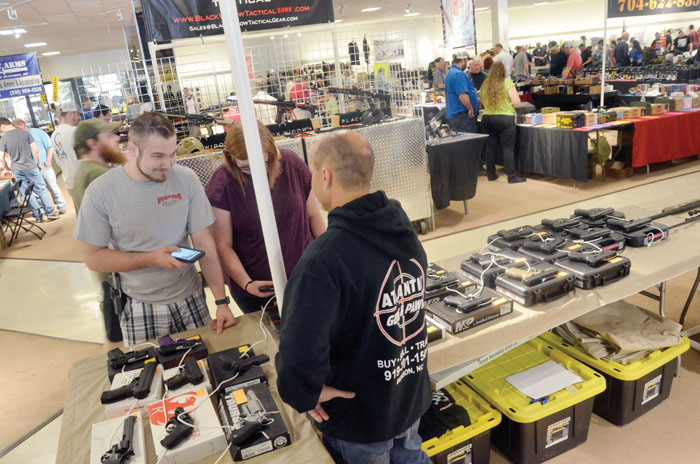 Cody Mullis, left, talks with Todd Selleck of Atlantic Guns & Pawn about purchasing a slimmer gun than the one he currently owns. Mullis and friends Caleb Mullis and Michelle Hodge attended the Gun & Knife Show at the West End Plaza in Salisbury. Shavonne Walker/Salisbury Post

SALISBURY — William “Bucky” Childress got his first gun at the age of 11 and, as an adult, taught his children proper gun safety as early as four years old.

Childress said he understands people who fear for their safety, especially after mass shootings like the one at Marjory Stoneman Douglas High School in Parkland, Fla., where 17 people were killed. But he countered by saying the biggest issue at hand right now is a lack of education about guns.

He and his wife were among the over 1,300 people who attended the Gun & Knife Show at the West End Plaza on Saturday morning. Childress said he searched online for gun shows that were close to him and Salisbury was at the top of his search. His goal was to purchase rifle scopes and steel target plates.

“You can’t create a society that’s 100 percent safe all the time. You have to look at each situation individually,” he said of mass shootings.

Childress is convinced the government creates the mass hysteria, adding that most gun owners are responsible.

“I’ve got kids, one in college, I taught them how to use a firearm,” he said.

He suggested legislators look at how things have been handled in past situations and put measures in place that would address these gun issues.

The federal ban on assault weapons ban in the 1990s did nothing to deter crime, Childress declared.

“The only people affected by those measures are the honest people. Criminals are stealing weapons anyway,” he said.

What people fear is a violation of their rights to own guns, he said.

“There’s nothing wrong with protecting yourself,” Childress said.

In fact, he’s had to protect himself and his family three times and was glad he had firearms. During one incident, someone broke into his home at 1 a.m. and because he had a gun he was able to hold off the intruder until law enforcement arrived.

“You never know where a threat will be,” he said.

Marvin Jones, the owner of Marv’s Gun Shop in Salisbury, has been in business since 1986 and started vending at gun shows in the early 1990s. Jones sells long guns and handguns. He sold a range of guns to customers who were looking for both handguns and an old military rifle.

“Most of the customers are looking for guns for self-protection,” he said.

The other people who attend the shows, Jones said, are looking for accessories like scopes.

Jones said he believed the crowd was little more than normal, which he attributed to recent talk of gun control and other regulations following a mass shooting in Parkland, Fla.

“When there’s talk about making laws, our sales go up,” Jones said.

Jones pointed to the federal ban on assault weapons in the 1990s when people bought guns before the ban went into effect.

“People don’t like the government telling them what they can and can’t buy,” Jones said.

Brandy and Dustin Frick were at the gun show for the first time with their business, Frick Metals, to sell steel target plates. The couple launched the business, based in New London, about a year ago.

Dustin enjoyed shooting and working with metals so he combined his two interests into a full-time business.

Shane Crews, the owner of Crews International, sells primarily gun-related decals, hats and T-shirts. He attends about 48 shows a year throughout North Carolina.

What he’s seen in the shows he attends are people are most interested in AR-15s because people expect a ban on them.

He said the issue at hand when it comes to mass shootings is the people who have had access to guns. He noted that the teen, Nikolas Cruz, who is accused of killing 17 people, should’ve never had access to a gun. He said the only thing that will change mass shootings at schools and other public place is if people would notice behavior changes in someone they knew.

He said oftentimes in people charged in mass shootings there was a behavior change in them that no one noticed.

Most people purchasing guns are doing so to protect themselves, Crews said.

“People feel a little scared and want to protect themselves,” he said.

He said more women are purchasing guns than he’s ever seen before.

Michelle Hodge of Kannpolis was at the gun show with friends Caleb and Cody Mullis. She said although she wasn’t there to purchase a gun, she’s been around them her whole life. She’s an advocate of gun ownership and says she is looking at getting one for herself in the future.

Gun show promoter Brandon Cupp said he and his wife, Ashleigh, had 85 vendors at the gun show, most of whom were selling guns or accessories.

Cupp also said when the government starts talking gun control, people get a sense of fear. He said right now the supply is big and prices are low for guns. After the Sandy Hook shooting in 2012, the supply for guns “dried up.”

Cupp mentioned comments that Salisbury Mayor Al Heggins made to a local TV news station regarding the irony of a gun show after a week where local high schools were on lockdown because of threats of violence on social media.

“We have students who were afraid to go to school and the fallout from what happened in Parkland, Fla. It was just ironic to me,” Heggins said.

Heggins said she can only imagine knowing there was a gun show this weekend may have been concerning for some children and parents.

Heggins said having been in the military, she recognizes people’s right to own guns but believes guns, particularly assault weapons, should not be available for civilian use.

Heggins served 19 years with the U.S. Army in the Adjutant’s General Corps and Military Intelligence.

Heggins said her comments have nothing to do with people’s right to bear arms, but she believes legislators need to look at access to assault weapons as it pertains to civilians.

Assault weapons are designed to “take down large numbers of people,” she said.

Heggins said that we are all in this together and we have to do better.

“We can’t lose sight of the fact that assault weapons are not like a regular rifle,” she said.

Heggins added that she intends to be at Salisbury High on Monday to greet students on the lawn as they come to school to let them know they are not alone and that she cares about their safety.

School board may finalize calendar Monday