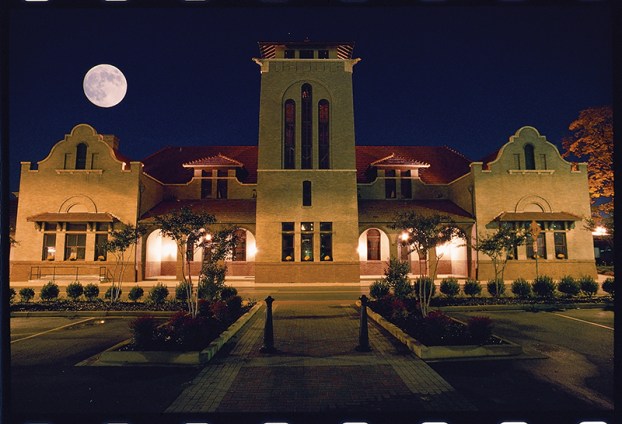 The 1908 'Historic Salisbury Station' at night. Photo by Jason Williams

Clyde, Time Was: Be thankful for work and people who labor

“So built we the wall … for the people had a mind to work.”

Time was, Salisbury was the place to work.

Imagine the city at the turn of the century in its heyday, with everything under construction — the train station, the Henry Clay Grubb building, mansions on Fulton Street, the Spencer Shops, the Whitney Dam Project that brought Mr. E.B.C Hambley to town, the quarries and gold mines and cotton factories on every hillside.

Why do you think they called it “Easy Street”?

The Old Hickory Club met on the roof garden at the then-new building that’s now the Plaza. On a really clear day, you could see Pilot Mountain.

A 34-foot-tall, diamond-shaped electric sign hung from the Yadkin Hotel, announcing “Salisbury is the Place.”

The great white way attracted the eyes, and the finest of mercantiles grabbed pocketbooks.

Thirty-five boarding houses and dozens of grocery stores fed the workers. The occupations of townsmen were listed in the city directory, along with 50 clergymen who preached temperance while half as many distilleries offered libation.

George McPoole and Cham Coughenhour held court under the portico of the Empire. Everybody knew “what you did.”

A drayman and a hack were the equivalent of the modern-day Uber. We don’t have too many carriage painters these days. But we do have ever-ready repairmen, like Mike and his grease monkies at one local repair shop. Fry cooks earn their salary by the sweat of the brow. Fewer jobs require physical, repetitive effort.

As Oscar Wilde said, “It is better to have an income than to be fascinating.” So it’s off to work we go, hi ho.

Sometimes we had “hep,” paid or not. You left a card in the window if you needed ice. The Westview dairy put milk on your porch. Not so long ago, Pope and Arey’s would deliver your order and put them away for you, Amazon.

Now, more people work hard to get out of work. How many grandmothers can you have?

On the other hand, 662 million vacation days go unused.

The Japanese live to work, with company housing, food and planned weddings — unlike us, who work to live, with help from ibuprofen, Cialis and Miller Lite.

Time was, we changed from work clothes and work shoes to church clothes. Max Weber sums it up in “The Protestant Ethic and the Spirit of Capitalism”: “The summum bonum of this ethic is the earning of more and more money combined with the strict avoidance of all enjoyment.”

Your occupation was your life work, regardless of your field or diploma. You couldn’t change from deputy to bank robber overnight.

Too many choose jobs like database warehouse architect system analyst, consultant, aide, developer, facilitator. Are those made-up jobs? Movie credits, for those who stay to give credit, include the weirdest titles. Production parking assistant food stylist. What actually is the best boy or a key grip? Does he lug heavy bags around? High tech titles get the award for words that mean they play at the internet. Solution engineers.

Don’t forget to thank the workers of America. When is the last time you told an employee “job well done”? Don’t wait ’til it’s too late to give credit to the time-card punchers who get “wore slap dab out.”

So put your nose to the grindstone. As the old hymn goes, “Work for the night is coming … Not to the dark we’re tending, But to the day we go.”

Clyde’s Time Was: Of cowboys and Indians

Time was, we played cowboys and Indians. For hours on end, on Saturday mornings with black-and-white TV and Ovaltine, six-shooters... read more