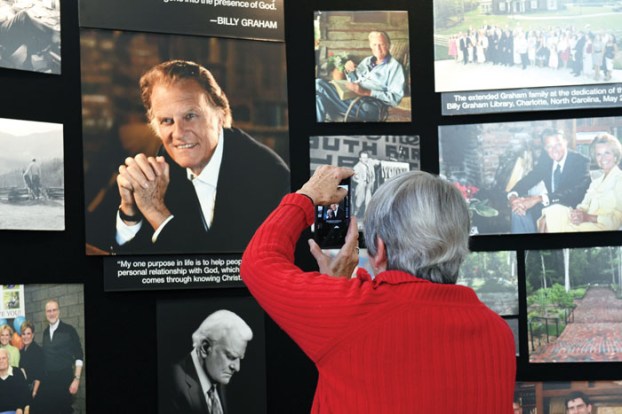 The Rev. Billy Graham will lie in honor at U.S. Capitol, a rare tribute

By Jonathan Drew and Jeffrey Collins

MONTREAT — The Rev. Billy Graham’s body will lie in honor in the U.S. Capitol Rotunda next week, the first time a private citizen has been accorded such recognition since civil rights hero Rosa Parks in 2005.

The two-day viewing in Washington on Feb. 28 and March 1 will be part of nine days of mourning for postwar America’s most famous evangelist, who died Wednesday at his home in the North Carolina mountains at age 99.

“America’s Pastor” will be laid to rest March 2 at the foot of a cross-shaped walkway at the worldwide headquarters of his evangelical empire in Charlotte, buried in a simple prison-made plywood coffin next to his wife, Ruth, who died in 2007.

His tombstone will read “Preacher of the Gospel of the Lord Jesus Christ.”

U.S. House Speaker Paul Ryan on Thursday announced the plans to honor Graham at the Capitol, a rite usually accorded presidents and other statesmen. A viewing will also be held at Graham’s Charlotte library on Monday and Tuesday.

The North Carolina-born farm boy reached hundreds of millions of listeners around with the world with his rallies — or what he called “crusades” — and his pioneering use of television.

In Graham’s home state, people can sign a book of condolences at the old Capitol building in Raleigh. Gov. Roy Cooper issued a proclamation ordering a “Book of Condolences” be placed inside the Capitol rotunda, where it will be today through March 2, the day of Graham’s funeral.

Cooper plans to present the book to Graham’s family.

More than anyone else, Graham built evangelicalism into a force that rivaled liberal Protestantism and Roman Catholicism in the U.S., and he became a confidant of presidents and other leaders.

His coffin was built by inmates at the Louisiana State Penitentiary in Angola, Louisiana, who typically construct caskets for fellow prisoners who cannot afford one. Graham’s son the Rev. Franklin Graham toured the prison in 2005 and said he was so moved by the simple boxes lined with a mattress pad with a wooden cross nailed to the top that he asked for ones for his mother and father.

The funeral at Graham’s Charlotte headquarters will be held in a tent in the main parking lot of the library in tribute to the tent revivals in Los Angeles in 1949 that propelled him to international fame, family spokesman Mark Demoss said.

About 2,000 people are expected at the private, invitation-only funeral, and invitations are being sent to President Donald Trump and the five living former presidents, DeMoss said.

Around Montreat, where Graham lived, he was a humble presence known to slip quietly into a local church for Sunday services. Shelby Crump of Starr, South Carolina, was visiting the town when she heard the news of the evangelist’s death.

“A lot of people were saved through his preaching,” she said. “I’m saddened. Not many like him left.” Franklin Graham said Thursday that his father would want to be remembered as a preacher.

He told NBC’s “Today Show” that Graham’s children asked several years ago what he wanted on his tombstone and he replied, “Preacher.”

The younger Graham said his father was the same at home as he was on television. He said his father had been in fairly good health until his 95th birthday. After that, he suffered health problems and was confined to his bed and a wheelchair at his mountain home in Montreat.

Franklin Graham said his father could not hear or see very well but remained mentally alert.

SALISBURY — The hospital room in Curacao held beds for six women. The windows and sliding door were open to... read more