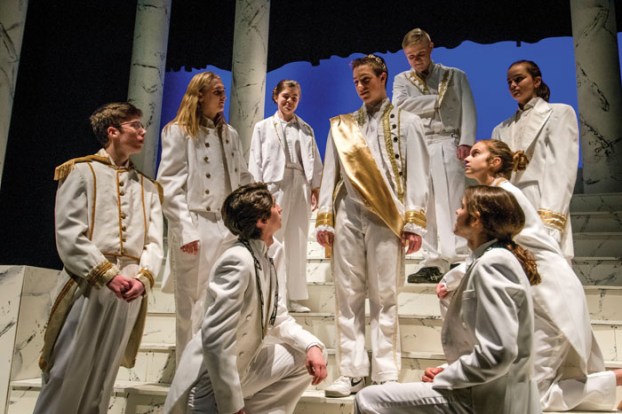 “My favorite scene is the war scene. It’s my favorite because it’s the most dramatic. It has everyone with sword in hand, music is playing and a lot of important characters die.” — Jordan H.

“I really enjoyed ‘Julius Caesar.’ The characters and scenes were very well developed and presented. The set was amazing. It worked very well with the blocking of the play. All the sound effects were amazing. The storyline was also presented very well. I knew what was going on even though Shakespeare is hard to understand sometimes.” — Jenna P.

“It was so detailed it was amazing. They must have practiced a lot to get it that great. The sound effects were so real. The actors tried their hardest; it came out very great.” — Morgan M.

“I thought it was a great play overall. It was a little confusing about the words they said. It was odd how they talked.” — Weston W.

“I felt like the play was good, and I thought it was entertaining. It was nothing to brag about, though. The acting and costumes were good. I liked how the costumes were modern.” — Banagher H.

“The play was well-choreographed. The actors were all obviously excited to be acting. The script was very difficult, but they did great with saying their lines and with emotion. The actors all complemented each other nicely.” — Cyprus J.

“My overall impression of the play is that, even though the play features kids that are still in high school, it felt like most of the actors seemed like they had been acting their entire lives. If the cast of this play was to perform in Shakespeare’s era, many of the actors would be cast in the other play directed by Shakespeare himself.” — Luke O.

“The play was good. It was eye-catching and it was pretty good acting but it was quite unrealistic. Nothing to brag about, and it was a bit different from the book.” — Devin P.

“I really enjoyed the play. Even though it was confusing and hard to follow at times, I enjoyed it and how it shows that teenagers and younger people can do an adult tragedy Shakespeare play.” — Aaron M.

“There were times when it looked like a bunch of young adults were on the stage, like a professional performance.” — David C.

“This play was not very exciting today. I felt like it was extremely confusing and didn’t make any sense. I could tell that there was action and when Caesar got murdered. I overall did not enjoy it.” — McKenna A.

“I thought the ‘Julius Caesar’ play was wonderful. I thought everything from the costumes to the scripts to the set were amazing. It was so much better than I thought it would be. If I could go see it again, I would so do it. This play is a must-see.” — Ava S.

“It was good. They had all kinds of emotions, but I could tell they all tried their best and put their heart into it and made it very realistic, and I am proud of them all.” — Morgan R.

“I really enjoyed this play; it really drew me in. I just wanted to find what happened next. But there was this one kid who I just couldn’t understand what he was saying. I don’t want to point fingers, but I don’t remember his name. But he could of pronounced it a little better. But all the actors and actresses were amazing. I just didn’t want it to end, but it did and it was sad but everything was great. I loved it so much.” — Grace B.

“I didn’t like how they were all wanting to kill themselves, but it was actually pretty good.” —Ethan W.

“It got boring after a while, but it was like they were really who they played.” — Tyler L.

“I like when they were fighting with the sword. Five stars!” — Garret M.

“I enjoyed they play because everybody did such a good impression of the characters of the play. I give this five stars because of how good everybody did acting in the play.” — Jill B.

“It was amazing. I believed the actors were who they said they were. I could see the emotion. I couldn’t tell the sword fight was choreographed, but I did see no one actually got hurt.” — Bella K.

“My favorite character was Caesar because he had very great talent in how Caesar would have portrayed the role. He acted everything very well. During the plot of Caesar’s death, Shakespeare wrote how his best friend betrayed his own ruler. The lesson is to be loyal to your friends.” — Katy L.

“I loved the play. Shout-out to all the people because they did amazing. There were points when I couldn’t understand what people were saying but I got the gist. Everyone who participated should be proud of themselves because it was well put together. Everyone was prepared, and the set was amazing. I would highly recommend going to see ‘Julius Caesar.'” — Abbey D.

“I enjoyed the play and thought they worked hard on it. I really was impressed by the set and how all the actors were able to memorize all their lines because of the difference in the language. It was an impressive play.” — Anna

The last chance to see Julius Caesar is at 7:30 p.m. Friday and Saturday at the Norvell Theater, 135 E. Fisher St. For tickets, call 704-633-5471 or purchase them online at PiedmontPlayers.com

By Cierra Lannon The letter I finally received in the mail opened the possibility of a new world at Carolina... read more