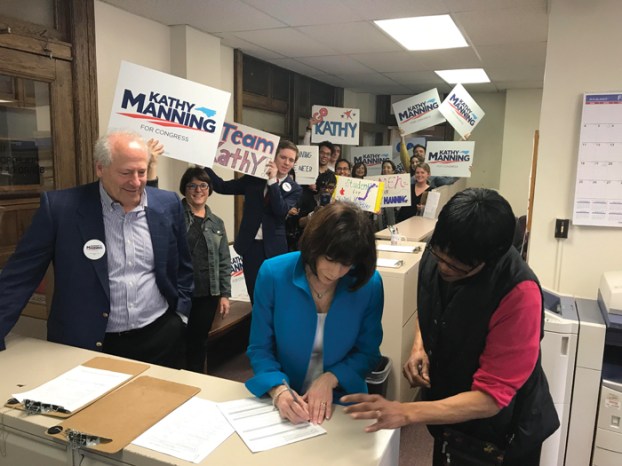 Democrat Kathy Manning files for U.S. House of Representatives in District 13. She was joined by what she called a "few dozen of her closest friends, families and supporters." Submitted photo

SALISBURY — Two more Democratic challengers have filed their candidacies for seats in the U.S. House of Representatives.

The 13th District includes includes Davidson and Davie counties and parts of Rowan, Iredell and Guilford counties. Republican Ted Budd is the incumbent.

Huffman, who filed Tuesday, is a Navy veteran and small business owner from Spencer.

When he returned home, he started a home improvement business. In 1995, he sold that business to start a technology business that would amass more than 3,000 customers, according to his website.

Those customers were not created from tax breaks, he said, but from offering a good product and working hard to deliver services.

“Those in Congress … have rigged the game against us,” Huffman said.  “Every day new favors are turned into laws and regulations that take away the American middle-class dream. They are taking away health care, public education, jobs and fair wages. They are even taking away the dignity to retire.”

Manning, of Greensboro, filed Wednesday. She was joined by few dozen friends, family members and supporters.

“I’ve lived in Greensboro for over 30 years and have spent the last several months traveling across our community listening to the concerns of people living in the 13th District,” said Manning. “We need better paying jobs, more affordable health care, and increased access to quality education to ensure our children are ready for the jobs of tomorrow.”

Manning, a businesswoman, community leader, and mother, chaired one of the world’s largest charitable organizations, the Jewish Federations of North America. During that time, she said, she brought people together to improve education and provide relief to people who lost jobs during the economic downturn. That included job retraining and mortgage assistance.

“I’ve spent my career bringing people together to solve tough problems. It’s time for Congress to do the same,” she said.

The window to file for public offices closes at noon Feb. 28. For more information about how to file and the offices up for election, visit the Rowan County Board of Election website at https://www.rowancountync.gov/191/Elections.