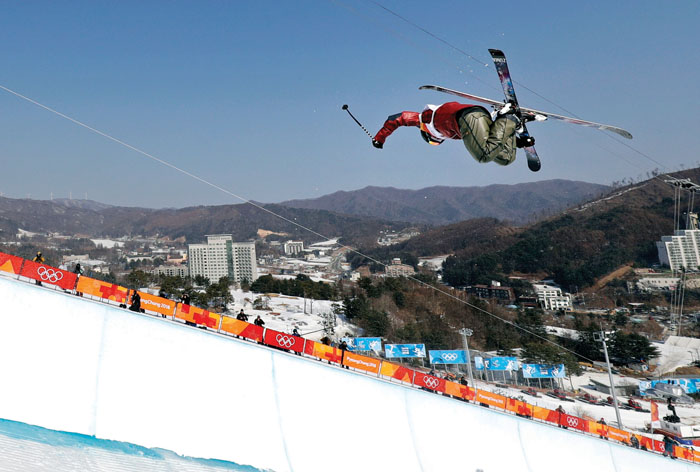 PYEONGCHANG, South Korea (AP) — Cassie Sharpe put on a show in the women’s freestyle halfpipe final on Tuesday, soaring to a 95.80 during her second run to give Canada its first Olympic medal in the event pioneered by the late Canadian star Sarah Burke.

Sharpe topped qualifying on Monday with a pair of big runs and went even higher in the finals. Her winning run included a 1080-degree spin and the kind of air the rest of the 12-woman field simply couldn’t match.

France’s Marie Martinod added a second silver to go with the one she captured in Sochi four years ago when the sport made its Olympic debut. Martinod scored 92.60 on her second run but fell during her third to assure Sharpe of the gold.

American Brita Sigourney edged teammate Annalisa Drew for bronze. Drew scored 90.80 on her final run to slip past Sigourney only to have Sigourney, the next skier down, put up a 91.80.

Defending Olympic champion Maddie Bowman of the United States fell on the final hit during each of her three runs in the finals.

Burke helped pave the way for halfpipe to reach the Olympics, winning four X Games in the event. She died in 2012 following complications from a training fall in Park City, Utah.

Sharpe is among a group of skiers carrying on Burke’s legacy. The group includes Martinod, who was considering retirement before the sport became part of the Olympic program. Burke talked her out of it, saying Martinod needed to help show the world what freestyle halfpipe skiing was all about.

Martinod, at 33 the oldest skier in the field, threw down a pair of stylish runs to put pressure on Sharpe. When she bailed midway through her final run, assuring Sharpe of gold, she laughed and raised her hands. She celebrated her second Olympic medal with her 8-year-old daughter.

Sharpe, who raps to herself before each run and wears a mouth guard with a gold tooth painted in the middle, talked openly after qualifying about the chance to have a “victory lap” if she knew she had gold in hand before her final run. It happened just as envisioned, though her last trip didn’t go down quite like she planned. The 25-year-old washed out halfway through her run, though it hardly mattered.