Livingstone president to be part of UNC-TV program 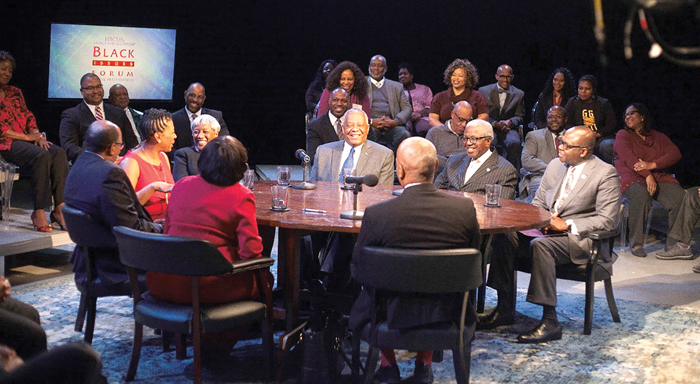 UNC-TV photo Dr. Jimmy Jenkins, second from right at the table, during the special 'Black Issues Forum' presentation to be aired Monday night on UNC-TV.

SALISBURY — Livingstone College will be part of a special UNC-TV documentary on the relevancy of Historically Black Colleges and Universities today.

North Carolina is second in the nation in the number of HBCUs. These historic schools of higher learning have cultivated some of the best and brightest minds — filling a need when predominantly white colleges and universities refused.

Today, where some semblance of acceptance and opportunity exists at those state and private institutions, how are HBCUs doing in our state and how do they remain relevant and vital options for students?

In this first-ever convening of top North Carolina HBCU leaders to be broadcast statewide, the program is designed to serve as a companion piece to documentarian Stanley Nelson’s film, “Tell Them We Are Rising: The Story of Black Colleges and Universities,” which also premieres statewide on Feb. 19 at 10 p.m. on UNC-TV after the special presentation.

As a lead-in to the national program, UNC-TV’s “HBCUs Legacy & Leadership” surveys the historic, cultural and economic value and contributions of these educational institutions to N.C. UNC-TV Producer Deborah Holt Noel leads a discussion featuring a panel of leaders from the state’s HBCUs and affiliated institutions.

The conversation features their experience, insights and opinions, along with candid assessments of the state of HBCUs and their constituencies.

In an exchange exploring the continuing role and relevance of HBCUs among African-American students, Livingstone’s Jenkins stresses that, “Education is our civil rights struggle of today. And we need to make sure that as we educate more of our people, they can move into those tables and places around the city … and represent us where decisions are being made, that’s really what it’s all about.”

Audience member Rep. Bobbie Richardson of the N.C. General Assembly also discusses the HBCU support in the state legislature. “When you are talking about community engagement, you also need to talk about like-minded people who have like-minded values, that you send to make the policies about your institution, about your communities, about the streets that you ride on. We need to do that. Because other communities are doing that. No one is going to give us power. No one is going to give us power and we’re always going to have to fight for it. We will do what we can in the General Assembly,” he said.

The discussion, which was taped before a studio audience, extended beyond the hour available. Content not used for the final cut will be available as extra material on social media.

Interior designer Priscilla Clark is ready to do it…