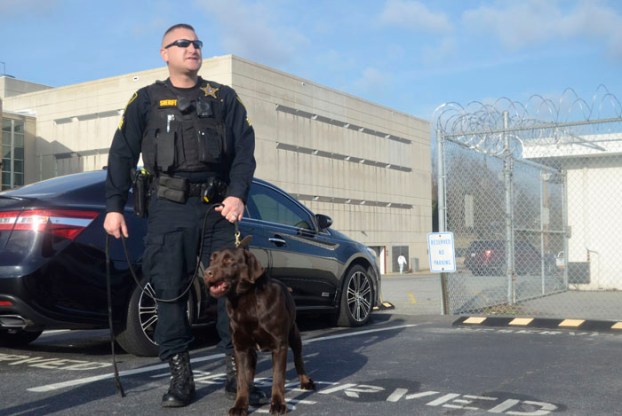 Rowan County Sheriff's Master Deputy Justin Nelson stands with his new K9 partner, Rex, a 14-month-old English Labrador. Rex will work searching for people, articles, drugs and in other capacitities. He was purchased solely through donations and contributions from the community. Shavonne Walker/Salisbury Post

SALISBURY — It’s all a game for the newest member of the Rowan County Sheriff’s Office — a 14-month-old chocolate English Labrador named Rex.

The dog, who is partnered with Master Deputy Justin Nelson, was purchased exclusively through donations from residents and local businesses.

In August, K9 Ike, a 10-year-old Labrador whom Nelson had been partnered with since January 2009, died of illness following a stroke. Ike had a stroke in March and was thought to be on his way to recovery.

Nelson took him to an emergency veterinarian and later to Ike’s regular vet, but the dog had problems walking. Ike was put to sleep Aug. 23.

Almost immediately, Nelson began looking at finding another K9. Once given the OK, he contacted Highland Canine Training Inc. The Harmony facility is where the Sheriff’s Office has found other work dogs.

Nelson was soon told that a dog had just come in from Europe. He the met the stocky, hyper lab from Poland.

“All the money to purchase Rex was donated,” Nelson said.

“It’s through the generous outpouring of support that he purchased exclusively through donations,” Sifford said.

The cost, including training and equipment, was $8,900.

“The citizens are going to benefit from it,” Nelson said.

Rex will be used to search for lost people, articles of clothing, drugs or other items.

“It’s a game to him,” Nelson said as he showed the dog a tennis ball.

Nelson said Rex, whom he described as short and stocky, is a lot “wilder” than his previous K9, Ike. But he said Rex is ready to work.

“He’s got a lot of energy. He likes to work, and he trains real well,” he said.

Nelson and Rex trained for three weeks at Highland Canine Training before he returned to Rowan County to continue more training. Nelson will regularly work with Rex in other training capacities throughout the month.

If there is a home break-in or a robbery, Rex could potentially find the thief or the stolen items by tracking the person’s scent.

“When things are bad, they are expected to show up and work,” he said of the dogs.