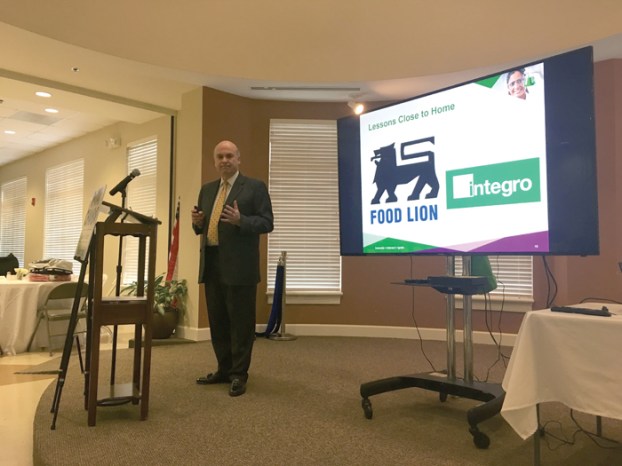 “We’ve got a lot of work to do,” says February Chamber of Commerce speaker

SALISBURY — Paul Wetenhall said that when Rowan Chamber President Elaine Spalding asked him to speak at a Power in Partnership breakfast, he gave her a warning.

“I said, ‘I’m not going to be the chamber-of-commerce cheerleader type. I’ve got some tough news to talk to people about,’” Wetenhall said.

The theme of Thursday’s Power in Partnership breakfast was regional entrepreneurship development resources, and Wetenhall — who is executive director of Ventureprise at the University of North Carolina at Charlotte — spent most of his presentation going over what does and does not work in the development of those resources.

“We’ve got a lot of work to do,” Wetenhall said of the region.

Wetenhall has assisted more than 150 innovation-driven ventures in his career. He said he’s spent so many years with entrepreneurship and innovation because he thinks it’s “one of the most important things in the American economy.”

“It’s what differentiates us from the rest of the world, in many ways,” Wetenhall said.

But most of the innovation in the Charlotte metro area — which includes Rowan and Cabarrus counties — in the last few years has been focused in Mecklenburg County, he said.

Only one of the annually ranked 50 fastest-growing private companies in metro Charlotte for the past nine years has been based in Rowan County, he noted.

He said patents reflect a similar story — Rowan County had only had five patents filed per year on average from 2000-09.

“That’s less than 1 percent of all of the patents in metro Charlotte,” Wetenhall said. “So not a lot of invention happening.”

He said the creation of the Rowan Idea Center — and similar entrepreneurship hubs in the Charlotte metro — would likely help those statistics.

The entrepreneurial world, he said, can be summed up with a metaphor: lemons and pearls.

“Food Lion was not a pearl in its first five years. None of the companies — with rare exceptions — get there quickly,” Wetenhall said. “So I encourage all of you to stick to it and recognize that you’re doing something that is a decades process, not a years process.”