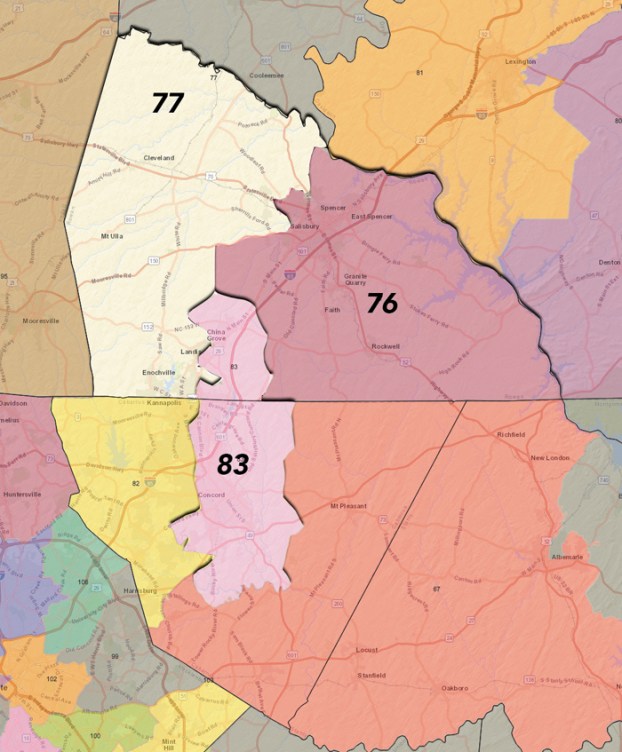 Screenshot of Rowan redistricting for the North Carolina House of Representatives.

SALISBURY — Rowan County’s districts for representation in the North Carolina General Assembly will stand as proposed despite last-minute changes in nearby counties.

Changes for Rowan remain as proposed in August. The county is now split among the 76th, 77th and 83rd House districts and in the 33rd Senate District, meaning it gained a representative and lost a senator.

Redistricting at both the House and Senate levels has been ongoing since August 2016. At that time, the Middle District court found nine state Senate districts and 19 state House districts were unconstitutional racial gerrymanders.

Prior maps packed large numbers of minorities into a comparatively small number of districts, thereby reducing the influence of their votes.

Then-Rowan County districts, the 25th and 34th for the Senate and 76th and 77th in the House, were not among those identified as gerrymanders.

Even so, new maps have changed Rowan County’s representation. In 2018, Rowan voters will elect one senator and three representatives.

Both have filed for re-election in their newly drawn districts. Barrett is running for senator in District 31, which covers Davie and parts of Forsyth counties. McInnis is seeking re-election in the 25th District, which now includes Anson, Richmond, Scotland and Moore counties.

District 33 is, to date, an uncontested race. Current Rep. Carl Ford, R-76, is campaigning for the seat, having decided not to run against fellow House incumbent Larry Pittman in the new District 83.

The 83rd House District’s extension into Rowan will be new. In 2016, it included parts of Concord, Kannapolis, Locust, Harrisburg and Midland.

Now, it has nudged northward, losing Harrisburg and Midland and taking in Landis and China Grove.

Filing for the state Senate or House is open until noon Feb. 28. Filing can be completed at the Rowan County Board of Elections office, with a fee of $207 for each seat.

Craig Pierce: ‘I don’t have confidence with the current board today …’