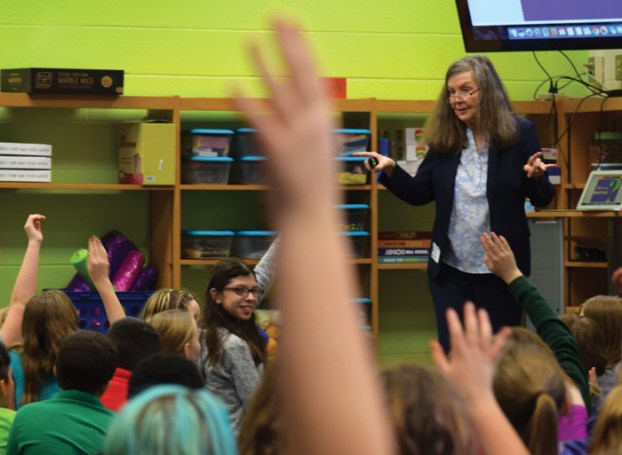 “Our theme started out as mysteries, but we’ve converted it to, ‘Middle school is not a mystery,’” media center coordinator Cheryl Lang said.

Corriher-Lipe Principal Justin James said he hoped that seeing the school and becoming more familiar with middle school would help get the fifth-graders excited about next year.

The future Yellow Jackets moved in groups through the halls, getting a building tour, attending a pep rally, choosing learning sessions and, as a special surprise, meeting an award-winning author.

Over the past five years, Sheila Turnage has become famous for her children’s mystery novels. “Three Times Lucky,” published in 2012, is the first in a series that takes place in the fictional North Carolina town of Tupelo Landing.

“Population 148 — minus one for murder,” Turnage said, describing the setting.

The story follows Moses “Mo” LoBeau, a curious and strong-willed rising six-grader, as she works with her best friend to solve both the identity of a murderer and that of her long-absent mother.

“The book is about a small town that to me is a lot like Landis,” Lang said. “It’s a very North Carolina story.”

Corriher-Lipe had hosted Turnage before and decided to bring the author back after “Three Times Lucky” was put on the Elementary Battle of the Books list. Each fifth-grader who visited Thursday was given a copy of the novel.

Turnage spent time talking about the book, her writing routine and mysteries. When asked what they like about mystery stories, students said trying to figure out the ending, that they never know what will happen next, and that the stories are suspenseful and interesting.

But for Turnage, “Three Times Lucky” began with Mo, the book’s narrator. Turnage said she could hear Mo telling the story so clearly in her imagination that she just had to write it.

“That’s one way the imagination works,” she said.

She also explained how she pulled some details from her own life and added them to the book. A hurricane that sweeps Mo away as an infant is based on one that Turnage lived through several years ago on the coast.

The town of Tupelo Landing pulls details from Turnage’s own life in and around Farmville, in eastern North Carolina. And some of the many characters that color the town contain bits and pieces of people she’s met throughout her life.

“When you’re a writer, you take things that have happened in real life and turn it into fiction,” she said.

She decided to base her book in North Carolina for similar reasons.

“I like to write about North Carolina because that’s where I’m from, and I think we’re worth writing about,” she said.

Her life, she told students, is an example that “you don’t have to live somewhere fancy to be a writer.”

“It really doesn’t matter where you live. … If you listen to your imagination and if you are fearless in following your imagination, it is never too late to get started,” she said.

“Three Times Lucky” is followed by another book about Mo and Tupelo Landing, “The Ghosts of Tupelo Landing.” The latest book in the series, “The Law of Finders Keepers,” will be released in September.

“We’ve got a lot of work to do,” says February Chamber of Commerce speaker

SALISBURY — Paul Wetenhall said that when Rowan Chamber President Elaine Spalding asked him to speak at a Power in... read more