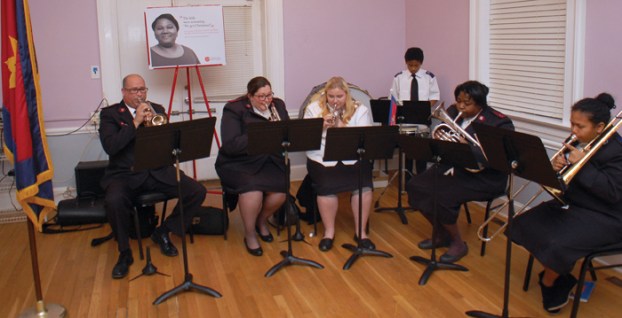 Salvation Army supporters told they are ‘an army of hope’

“We are an army of hope,” Hobgood told the board of advisers, staff, volunteers and supporters during the dinner at the Salisbury Elks Lodge.

Hobgood shared three anecdotes of how the Salvation Army stepped into the lives of struggling individuals — a drug addict, prostitute and homeless person — and provided the resources, time and advice necessary to prove “there is hope in a hopeless situation.”

“The Salvation Army is part of the solution,” Hobgood said, adding the organization is making “an eternal difference in people’s lives.”

Eric Nianouris, chairman of the local board of advisers, reported that the Salvation Army’s Christmas Kettle drive in Salisbury raised a near-record $58,200 and that all of that money stays in Rowan County to help those in need.

The Salvation Army also helped children over the holidays through Christmas Happiness and Angel Tree efforts that raised $155,000.

“We are going to try and make this an annual tradition,” Carr said.

The dinner was catered by Debbie Suggs, and a traditional Salvation Army brass ensemble provided music.

Board member Ray Paradowski arranged to have the Elks Lodge dining room provided to the Salvation Army at no cost.

Paradowski noted that the Elks and Salvation Army formed an important partnership as early as World War I. Salisbury’s Salvation Army dates back to 1912.

Following three years in London at the Salvation Army’s international headquarters, Hobgood and his wife, Kathy, have returned home to take leadership of the North Carolina-South Carolina Division.

In England, the Hobgoods were responsible for organizing and executing the 150th anniversary celebration of the founding of the Salvation Army.

They also were selected to produce the opening rally of the 2000 International Congress in Atlanta and direct the musical “Godspell.”

In 2005, Edward Hobgood wrote “The Turk: Sanctified Salvationist Showman,” a story based on the life of Staff Capt. Joseph Garabed, one of the Salvation Army’s most colorful officers.

In 2007, he was commissioned to write a musical about the life of Commissioner Samuel Logan, and in 2011, he penned the musical “Our People,” telling the stories of William and Catherine Booth, as well as the people of the Mile End Waste, whose lives all intersected and led to the birth of the Salvation Army.

GRANITE QUARRY — The Granite Quarry Board of Aldermen will conduct its annual budget retreat Friday and Saturday at Town... read more