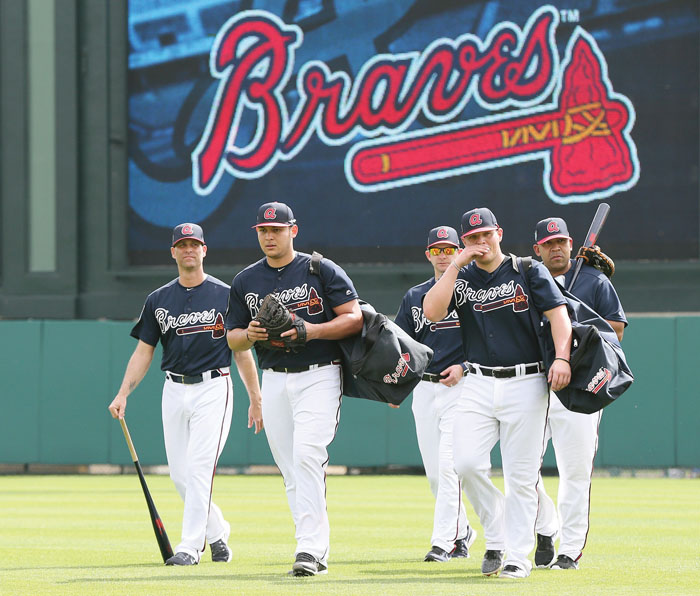 KISSIMMEE, Fla. (AP) — Brandon McCarthy figures his slider needs some work this spring. The last one he threw didn’t end up where he expected.

“I gave up a game-winning home run in the World Series on it,” McCarthy said Wednesday before his first organized spring workout with the Atlanta Braves. “So I really want to get back to work on it. I need the time and the reps to really get it under control and be effective with it.”

George Springer hit a two-run homer off McCarthy’s slider in the 11th inning of Game 2 of the World Series, a game the Houston Astros won 7-6 at Dodger Stadium. It was the last game the 34-year-old right-hander pitched for Los Angeles Dodgers, who threw him into a five-player trade with the Braves for Matt Kemp.

“The way things ended last year is really a letdown, but it was still great to go through the whole experience. It’s something you’d like to get past as the season goes along,” said McCarthy, who will be pitching for his seventh major league team.

McCarthy has 182 major league starts, including 16 with the Dodgers last season, and is one of three pitchers the Braves have penciled into their rotation as spring training begins. The others are Julio Teheran and Mike Foltynewicz.

After that the Braves have a lot of decisions to make in the next six weeks.

“We’ve got a couple spots open. There’s going to be competition,” manager Brian Snitker said. “A lot of these guys don’t have baseball cards yet. We still want to see what they can do year to year.”

Among those competing for the other two spots are veteran left-hander Scott Kazmir, who came in the same December trade with McCarthy, and four young pitchers who started games for Atlanta last season — left-handers Luiz Gohara, Sean Newcomb and Max Fried, and right-hander Lucas Sims.

Newcomb, Fried and Sims will also be in competition for relief spots.

“The bullpen’s pretty open, although there are going to be frontrunners based on what they’ve done in the past,” new general manager Alex Anthopoulos said.

“We got a lot done in a short period of time,” he said. “The one guy (Grant Dayton, who is recovering from Tommy John surgery) is rehabbing. Other than that everybody was here. Everybody is healthy.”

NOTES: The Braves agreed to terms on a one-year major league contract with catcher Chris Stewart, who will back up Tyler Flowers and Kurt Suzuki. Stewart played in 51 games with Pittsburgh last season. . . . The Braves have a game scheduled against the New York Mets on Feb. 23, only the fifth day after the full squad reports. “It concerns me a little bit, not so much the pitchers as position players,” Snitker said. “I know guys come to camp in shape and ready to go, but still, when it comes to baseball activity you have to assume that they didn’t do anything.”