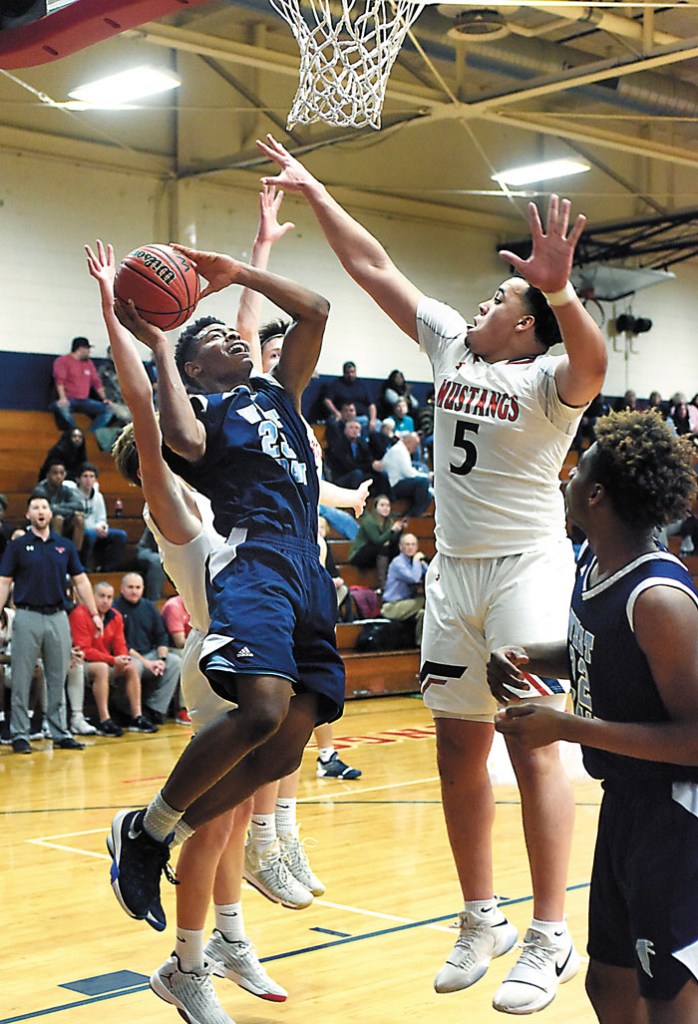 On a night when leading man Caleb Mauldin was well-contained, the Falcons turned to their supporting cast and surged past East Rowan in the North Piedmont Conference Tournament opening round.

“I think Caleb really helped us because he must have gotten 12 or 14 rebounds,” coach Mike Gurley said at South Iredell High School, where Mauldin scored a season-low 12 points in a 50-37 victory. “But he kept his mind in the game. There have been times in his career when having that happen would force him to lose focus. That didn’t happen tonight.”

Mauldin was bottled up by East’s collapsing defense, but still pushed West (13-12) into today’s 7:30 p.m. semifinal against top-seeded Carson. Help was provided by 6-1 forwards Jay Joseph and Payne Stolsworth and senior guard Josiah Dixon. Joseph shot 6-for-7 from the field and netted 12 points — his first double-digit scoring game since Jan. 26. Stolsworth drained a pair of 3-pointers in the first quarter, another early in the third and finished with 11 points. And Dixon extinguished a second-quarter East rally with successive, had-to-have-them baskets.

“The way they were defending (Mauldin), other people had to get open,” Stolsworth said. “Between their zone and them putting two guys on him, it was hard to get the ball inside. We had to look somewhere else.”

“That’s probably the best I’ve seen West Rowan shoot the ball,” he said, moments after the Mustangs (9-16) lost to West for the third time and likely ended their season. “Not that they scored a lot of points, but they hit a lot of open shots. We tried to tie Caleb up, but they had other guys step up and hit high-percentage shots.”

Joseph threaded a lovely, 15-foot jump shot from the foul line in the early moments, then hit a 10-footer from inside the lane with 3:40 remaining in the opening quarter. “Those are shots I’ve been working on,” he said. “They were just falling tonight.”

Stolsworth followed with splashdowns from the right side and the top of the key, helping West mount a 14-7 lead. East responded with long-distance dial-ups by Bryson Sprinkle and Brandon Jefferson, who tied the score, 21-21, when he connected from the right corner with 4:04 remaining in the half.

“We were able to keep Mauldin from scoring and wanted to work our way back, quarter-by-quarter,” Sprinkle said. “We made those, but we missed too many open opportunities. Bottom line is we didn’t hit enough shots.”

East was limited to 13 field goals and held below 40 points for the sixth time this season. “We’ve lost more close games than we’ve won,” Misenheimer said, “because we can’t score the basketball. You hold a team to 50 points, that should give you a good chance to win. It’s just hard to score when there’s a 6-8, 250-pound guy blocking the middle.”

Mauldin, who averages 23.8 points-per-game, scored his first points when he hit a stick-back that gave West a 27-22 lead with 1:49 left in the half. He converted only two of eight free throws, but helped the Falcons curb a two-game losing streak with a back-to-back, power-move layups late in the game.

Afterward, Gurley indicated he was pleased with West’s warts-and-all performance — even if its reward was another dance with Carson.

“We’ll take it,” he said. “Last week wasn’t our best basketball. We know it, I know it, everyone knows it. We were focused tonight, as much as you can be. It’s a hard thing to be 12-12 this time of year. When you’re in first or second place, you can see a big ‘ol carrot there. We can’t, but every time we play, it still means something.”

NOTES: West dropped three decisions to Carson — 70-52 on Dec. 28, 73-55 on Jan. 31 and 94-74 on Feb. 6. The Cougars (21-2) have won six in a row and eight of their last nine games. … Mauldin needs eight points tonight to reach 2,000 career points — just the third Rowan County player to do so (Scooter Sherrill and Donte Minter). … Former West standout Philip Williams was one of the game officials last night.