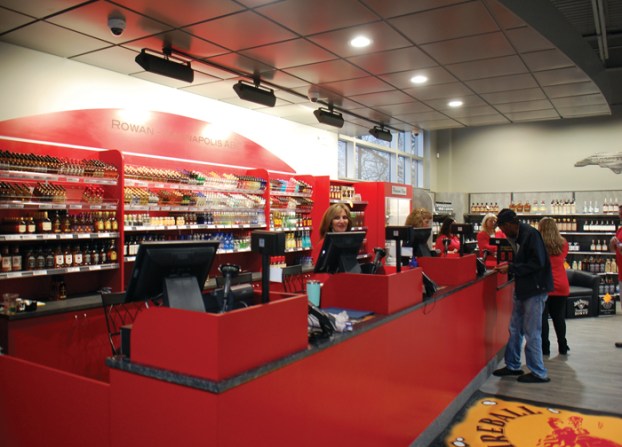 SALISBURY — If there can be a state-of-the-art ABC store, this might be it.

Rowan-Kannapolis ABC Board officials held a quick ribbon-cutting Monday morning for their new store at 1428 Jake Alexander Blvd. S. — on the same side of the boulevard and close to Sheetz at Old Concord Road.

The parcel is big enough to allow tractor-trailer deliveries, something the old location could not accept. The former 2,600-square-foot store, which closed for good Saturday night, sat on only 0.6 of an acre, but it still was the local ABC system’s most profitable spot.

“This is a great event for us,” said Terry Osborne, general manager of the Rowan-Kannapolis ABC system. “… We’re so proud of this.”

The Rowan Chamber of Commerce, banking, city and county government officials on hand Monday morning walked through a retail store with an attractive urban-rural decor. It includes alcoves for special merchandising, such as current displays on opposite walls for Fireball whisky and Jim Beam.

Hendrick said he and fellow ABC Board members Dave McCoy and Ken Argo knew they shouldn’t be counted on for any interior design expertise, so they turned to Rick Turner’s Design Plus, with input from architect and Salisbury City Councilwoman Karen Alexander and ABC education specialist Nanette Dillon.

Alexander is the city’s liaison to the ABC Board.

“It was really fun, a good challenge,” Alexander said.

Decisions had to be made, of course, on things such as flooring, shelves and colors.

“This is beautiful, and we’re very happy,” Hendrick said.

The Rowan-Kannapolis ABC system has six stores — two in Salisbury, one in Rockwell, one on the Rowan side of Kannapolis (North Cannon Boulevard) and two others in Kannapolis. The other Salisbury store is at Ketner Center off West Innes Street.

Ronald Vellines is manager of the Jake Alexander Boulevard store. Hendrick said ABC employees were working “night and day” in recent weeks to stock the new store and have it ready for Monday’s opening.

Vellines said the new store’s warehouse space will allow it to accept a tractor-trailer load a month, or roughly 22 pallets and 1,450 cases of liquor. The former store could handle a shipment from the local warehouse of only 400 cases.

The new store required a retention pond in back to handle drainage. It also sports a unique water runoff system as seen near the front entrance. Water from an awning runs down a chain into a small sidewalk drain.

Donna Poteat recently found this picture of how Military Avenue leading into the Salisbury National Cemetery once looked. “The rock... read more