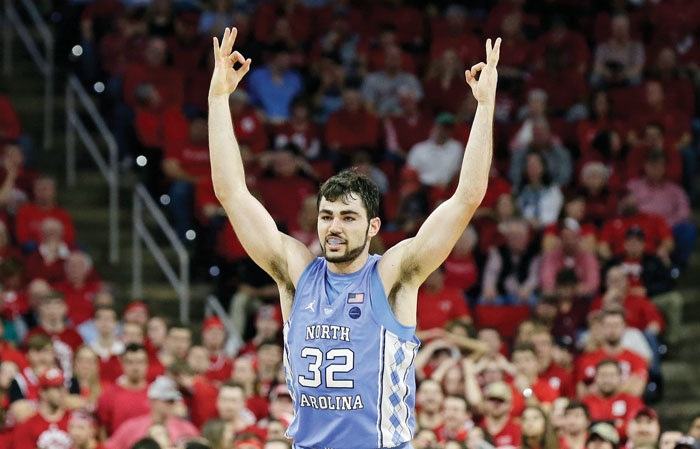 RALEIGH (AP) — The shots kept falling. The basket felt huge. And Luke Maye was so good that he nearly single-handedly carried No. 21 North Carolina’s second-half offense to a road rivalry win.

Maye scored 27 of his career-high 33 points after halftime to help the Tar Heels beat North Carolina State 96-89 on Saturday, getting even for last month’s home loss to the Wolfpack.

The 6-foot-8 junior also had 17 rebounds and spent most of the second half as a one-man show for the Tar Heels (19-7, 8-5 Atlantic Coast Conference), who were less than 48 hours removed from an emotional win against another area rival: ninth-ranked Duke.

“I really didn’t get to the basket very much the first half and was kind of shooting it a little soft,” Maye said. “So I just challenged myself to get out there and take it to the basket. Once I got some easy ones, I just started shooting and it started falling.

“And when it’s falling like that, you just continue to play and the basketball gods are looking out for you.”

“That was one of those games that you wish you could just watch on TV,” Pinson said. “I mean, that was a performance.”

Maye made 12 of 14 shots after halftime, included one stretch in which he scored 10 straight points and buried a heat-check 3-pointer over Omer Yurtseven with 5:50 left. His 15 made baskets overall were also the most for a UNC player under 15th-year coach Roy Williams.

With Maye rolling, UNC’s teammates basically grabbed a handful of his jersey and took the ride.

North Carolina shot 25 of 32 (78.1 percent) after halftime, the highest for any half under Williams and the best in any game since January 2000 (also against N.C. State). And in the end, Maye’s presence opened up things for his teammates to hit several critical late baskets.

The biggest came when Kenny Williams hit a 3-pointer with 1:13 left and UNC protecting an 85-83 lead.

“They started focusing on him a little bit more,” said Pinson, who had a couple of late layups himself. “And that opened up driving lanes for us.”

Torin Dorn scored 21 points to lead the Wolfpack (16-9, 6-6), who won in overtime in Chapel Hill two weeks ago. But N.C. State couldn’t complete its first regular-season sweep of the Tar Heels since 2003.

“We’ve just got to take more pride in getting stops,” Wolfpack freshman Braxton Beverly said, “especially at that point.”

UNC: The Tar Heels were coming off Thursday’s 82-78 win against the Blue Devils at home. And like that night, they were playing in a loud and rowdy environment — this time hostile — before responding with a strong performance out of the break. UNC trailed 37-35 at halftime before scoring on seven straight possessions — Maye scored on five of them — to go ahead for good and beat N.C. State for the 28th time in 32 meetings under Roy Williams.

N.C. State: N.C. State is still in the NCAA Tournament chase, but this one would’ve helped immensely. Picked 12th in the ACC, the Wolfpack entered Saturday with top-line wins (Arizona, Duke, Clemson, UNC) offset somewhat by an otherwise-weak schedule that featured 12 wins against Quadrant 3 and 4 teams — the lower half of the NCAA selection committee’s revamped system evaluating win quality.

“Now I have to get these guys to change their expectations,” first-year coach Kevin Keatts said. “I don’t want them to get to the point where they’re satisfied with how many wins that we’ve won right now.”

UNC senior Joel Berry stirred things up Tuesday by saying he didn’t consider N.C. State to be a rival for UNC. He heard plenty of boos from the irked crowd, but finished with 16 points.

“I ain’t got nothing to say,” Berry said. “My play spoke tonight, and that’s all I’ve got to say.”

With Pinson cackling from the next locker, Berry shrugged off a follow-up question, too.

“If y’all have got any more questions about it, put that statement on your article,” he said. “But that’s all I’m saying.”

UNC: The Tar Heels complete a run of three games in five days by hosting Notre Dame on Monday.