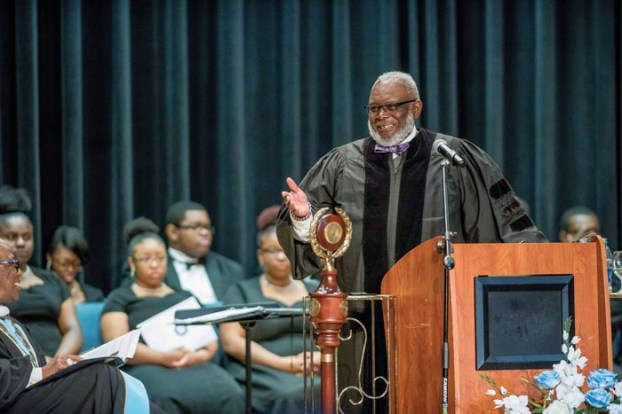 SALISBURY — More than 100 years has passed since Joseph Charles Price dreamed of a better future for young African-Americans in the post-Civil War South.

That dream led to the founding of Livingstone College, which Thursday celebrated its 139th Founder’s Day in honor of Price.

College President Jimmy R. Jenkins Sr. said Founder’s Day is a celebration unlike any other at Livingstone.

This year, Jenkins and others invested in the college tipped their hats to the history of sacrifices, successes and hard work that is the school’s — and its students’ — heritage.

“Our school was built on sacrifices, and we have a great legacy here at Livingstone College,” said Bishop George E. Battle Jr., chairman of the board of trustees. “We’re here because of Dr. Price’s tenacity.”

Price, founder and first president of the school, was born in Elizabeth City to a free woman and a slave. When he was older, his mother moved to New Bern so that Price could have a formal education.

Price graduated from Lincoln University in Pennsylvania and helped move Zion Wesley Institute from Concord to Salisbury, where it was renamed Livingstone College.

“It is remarkable to me that the son of a slave in the South in the 1800s could envision what we see here today,” said Susan Brantley, great-granddaughter of Price.

Price’s legacy has touched many over its long years, including J. Carlton Cole, a Superior Court judge in North Carolina’s 1st Judicial District.

Cole said he is a “living example” of Livingstone’s dedication to education and second chances.

Like Price, Cole is a native of Elizabeth City. Neither of his parents earned a high school diploma, and Cole grew up as what would come to be known as an at-risk child. But his home was full of love, his parents encouraged him to pursue an education and Livingstone gave him a hand up, he said.

His experience at the school led to a personal motto, of sorts: “God first, but Livingstone second.”

Price, Cole said, was a traveler walking through rough terrain who saw that others could tread the same path and who chose to build bridges to ease their way.

“He had that vision that young folk needed help,” Cole said.

His legacy inspired Cole, who went on to try out for flight school, work as a federal agent and eventually as a judge. In his 10 years on the bench, Cole has earned a reputation for listening to the stories of those who appear before him and basing his rulings on mercy or justice as each is called for.

“My philosophy is that we are all children of God,” he said. “…We all deserve a chance and an opportunity to be treated with respect and dignity.”

Cole challenged current Livingstone students to learn from Price’s example and to “go and do likewise.”

“My charge for you is to maximize your time here and to live your lives in the spirit of my beloved great-grandfather,” she said.

After his speech, Jenkins honored Cole with the President’s Award, the school’s highest honor.

Another honor was given to Battle as Jenkins announced that the school’s new business center will be named in his honor. The Dr. Bishop George E. Battle Jr. School of Business, Entrepreneurship, Innovations and Technology is expected to open in the coming years.

The Founder’s Day celebration ended with a memorial wreath laying at Price’s grave on campus.