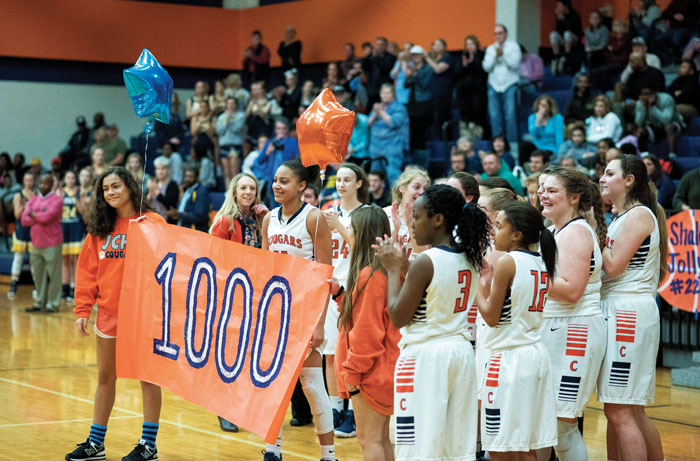 Girls basketball coach Brooke Stouder’s big concern as Carson’s Senior Night approached was numbers. Six seniors. Only five could start. So who sits? How do you tell someone who has come to practice every day for a long time that they’re not starting on Senior Night? Especially when your team is playing for a share of the conference championship.

Turney, a dependable post player who has scored 345 points for the Cougars over the years, solved that problem.

“It was one of the coolest things anyone’s done in this program,” said Stouder, who has coached every game Carson has ever played. “Anne Marie raised her hand and said, ‘I’ll not start.’ Just totally unselfish.”

Turney cared more about her teammates than her own ego.  Olivia Gabriel, Taylor Wiggins, Maren Shumaker, Shaleah Jolly and Siera Fesperman took the floor to start the game.

“I actually started thinking about this night my sophomore year,” Turney said. “I knew we’d have six seniors, and I thought I should be the one to say it was OK not to start. It just felt right. I knew we were all going to play.”

They all played. They all played well. Gabriel, the program’s all-time scoring leader, scored eight of her 14 points in the first quarter as the Cougars surged to a 19-9 lead. Wiggins had her best game all season with nine points. Shumaker kept tossing in little hook shots and scored seven.

“But everybody was a little stressed,” Wiggins said. “Trying to tie for first in the conference. Senior Night. McKenzie’s 1,000 points. Just a lot going on.”

“Carson was outstanding defensively,” said South Iredell coach Michael Fisher, who watched his team slide behind, 38-15, by halftime. “We’ve got some good shooters, but Carson created havoc for our offense.”

In the second half, with the win secured, the mission for Carson was to get Gadson to 1,000 points.

“I didn’t know exactly where she was or how many she needed,” Wiggins said. “All I was thinking about was getting her the ball.”

Gadson, who came into the game with 987 points, had come off the bench to score two in the first quarter. Then she struggled through a scoreless second quarter. She didn’t look like herself, missing layups and clanging free throws. Normally the county’s most efficient scorer, she wasn’t coming close.

Even though Carson led comfortably, 54-24, after three quarters, Gadson still had only four points. She was sitting as the fourth quarter started. With 6:08 left to play, Stouder waved her to the scorer’s table.

“I was nervous all day thinking about it, and then I started off bad,” a relieved Gadson said. “But that changed in the fourth quarter. I have to thank my coaches and my teammates for all that they contributed tonight.  I couldn’t have done anything without them.”

Wiggins did a lot of the work to push Gadson through the 1,000-point gates. Gadson is the fifth in Carson’s 12-season history to get there. Wiggins made the pass on a fabulous Gadson three-point play — she absorbed contact and flipped the ball in with her back to the bucket — that got her to 996. After that remarkable shot, the anxiety seemed to fly off her shoulders. After another quick two, she hit two free throws to reach the milestone. The second one for 1,000 on the nose rolled around and spun back in.  The game was stopped briefly, as balloons magically appeared. Gadson held up a 1,000-point sign before hauling the history-making ball into the bleachers to give to her mother.

The shared conference title was only the second in school history (Carson also tied North Iredell for first in 2012).

“McKenzie reached a goal and we shared a championship, and we were able to do those things while celebrating our tremendous senior class,” Stouder said. “We played well and we stayed focused all night. I don’t think that there’s any way it could have gone any better.”