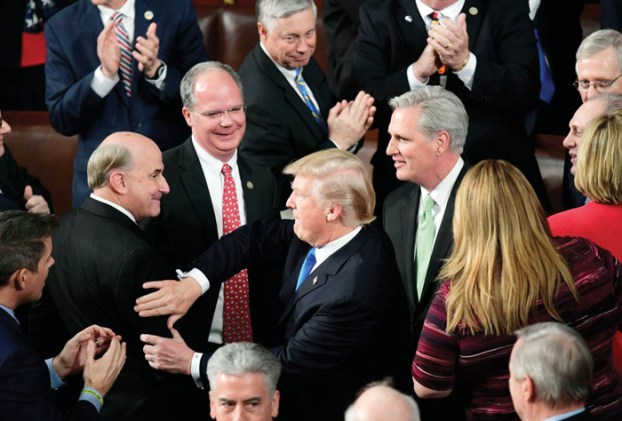 President Donald Trump greets members of Congress before his State of the Union address in January in Washington, D.C. Some members skipped the speech, though. Washington Post photo by Melina Mara

Other Voices: Legislators should respect the office of president

The office of president deserves honor, regardless of how one feels about the man who holds that office.

A group of at least 15 Democrats failed to respect both the office and the Constitution on Tuesday, when they stayed away from President Donald Trump’s first State of the Union address because of their opposition to the officeholder.

Staying away is better than heckling the president, as Rep. Joe Wilson, R.-S.C., did to President Barack Obama in 2009, shouting “You lie.” While absence is better than wearing a derogatory sign or walking out, boycotting the address still erodes the respect the office should command.

The State of the Union message to both houses of Congress is, after all, is a constitutionally mandated communication.

Article II, Section 3 of the Constitution says, in part, “He shall from time to time give to the Congress Information of the State of the Union, and recommend to their Consideration such Measures as he shall judge necessary and expedient.”

Legislators take an oath to support and defend the Constitution. The least they can do is show up to hear the information the chief executive is required to provide. Sure, lawmakers could watch it on CNN or Fox or MSNBC, but that isn’t the same as hearing it in person, unfiltered. Show up. Wear what seems appropriate. A fashion statement is OK, whether it’s an all-black outfit or Melania Trump’s off-white pantsuit — regardless of message, as long as attendees are not outrageously attired, it’s fine.

Even sitting stone-faced while refusing to applaud, as many attendees did, isn’t beyond the pale. If you like what you hear, applaud. If not, don’t. As long as members of both legislative bodies attend and maintain reasonable decorum, they are fulfilling their responsibility to hear the leader of the free world.

Our nation depends on the separation of powers and the balance between the roles of the executive, legislative and judicial branches. This separation requires that the branches respect one another’s roles and responsibilities in order to both serve as a check on one another and work together to effectively govern the United States.

Partisan sentiments and actions are undermining the sense of respect and decorum that help keep our system functioning.

The boycotters decry Trump’s message and manner, saying he is dishonest and the nation’s divider-in-chief. But the Constitution doesn’t include an “if you don’t agree with the president, you can ignore this message” provision.

The problem goes both ways. Democrats might say that Republicans such as Wilson started it. “The other guy started it” is an argument worthy of the schoolyard, not our nation’s government. Escalating disrespect drags us all down. Republicans might point out that many more Democrats boycotted the inauguration. That action certainly didn’t promote cooperation, but legislative attendance at the president’s swearing-in has never been required.

Congressional members represent all of us. They should respect the office of president if not the man. The boycott of the State of the Union deepens our divisions. This should be the last time it happens.

Rowan County attitudes about unwanted pets have truly transformed over the past seven years, all to the good. Fewer animals... read more