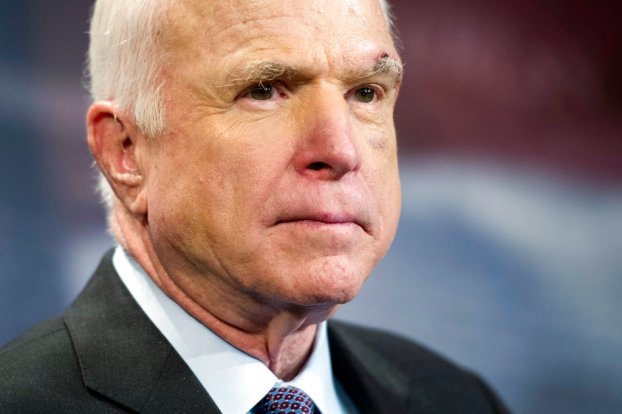 Letter: Those who divide us are ‘doing Putin’s job for him’

A true American hero and patriot commented on the recent partisan attacks on the FBI and the Department of Justice.

Sen. John McCain (R-Arizona) is one of the leaders of the Republican Party and has sounded a dire warning about the growing division in our country. McCain puts the country over partisan politics, and we need to heed his alarm. Citizens need to watch carefully what is happening in Washington and voice our concerns. Our republic is in danger if we do not allow justice to prevail.

Below is McCain’s press release:

“ ‘In 2016, the Russian government engaged in an elaborate plot to interfere in an American election and undermine our democracy. Russia employed the same tactics it has used to influence elections around the world, from France and Germany to Ukraine, Montenegro, and beyond. Putin’s regime launched cyberattacks and spread disinformation with the goal of sowing chaos and weakening faith in our institutions. And while we have no evidence that these efforts affected the outcome of our election, I fear they succeeded in fueling political discord and dividing us from one another.

“ ‘The latest attacks on the FBI and Department of Justice serve no American interests — no party’s, no president’s, only Putin’s. The American people deserve to know all of the facts surrounding Russia’s ongoing efforts to subvert our democracy, which is why Special Counsel Mueller’s investigation must proceed unimpeded. Our nation’s elected officials, including the president, must stop looking at this investigation through the warped lens of politics and manufacturing partisan sideshows. If we continue to undermine our own rule of law, we are doing Putin’s job for him.’ ”

From a column about President Trump by Peggy Noonan in the Wall Street Journal: He thinks he rouses and amuses... read more