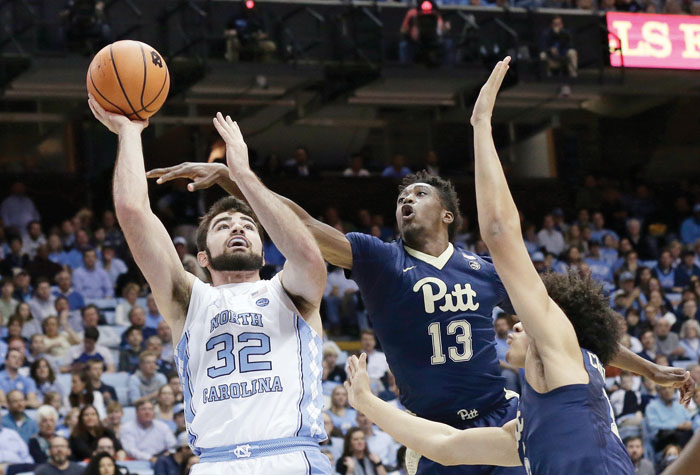 By AARON BEARD, AP Basketball Writer
CHAPEL HILL (AP) — North Carolina finally got its offense — and maybe its confidence — going again.
Luke Maye scored 26 points to help the 19th-ranked Tar Heels beat Pittsburgh 96-65 on Saturday night, ending their first three-game losing streak in four years.
“Our guys around here, you lose a couple and the kids start feeling the pressure because they’re such good kids,” UNC coach Roy Williams said.
The response was a positive, if for no other reason than the Tar Heels (17-7, 6-5 Atlantic Coast Conference) had a relatively stress-free night while matching their best scoring output in league play.
The Tar Heels also shot 51 percent, made 11 3-pointers and dominated the boards (47-28) en route to 22 second-chance points. Maye led six players in double figures, including junior Kenny Williams, who had his best scoring night after several rough games. And Theo Pinson (13 rebounds, eight assists) played a strong floor game.
In short, they made things look routine against a team that’s yet to win an ACC game.
“We needed tonight,” Pinson said.
UNC found itself in a close game late in the first half before blowing it open with a big run spanning halftime. Graduate transfer Cameron Johnson scored eight points against his former team in UNC’s 14-3 half-ending flurry, which grew to 25-5 when Joel Berry II hit his fourth 3-pointer for a 56-37 lead with 16:48 left.
Freshman Marcus Carr scored 22 points for the Panthers (8-16, 0-11), who hit eight first-half 3s to hang around but made 2 of 16 after halftime as the Tar Heels’ lead ballooned.
That sent Pitt to its 11th straight loss, the longest skid in program history.
“They played well obviously,” Panthers coach Kevin Stallings said. “I didn’t think that we did so much, but certainly you have to give them credit. It probably wasn’t the most ideal time to catch them.”
BIG PICTURE
Pittsburgh: Things keep getting worse for the Panthers. They entered Chapel Hill ranked last in the league in major categories such as scoring offense, shooting percentage, rebounding margin and turnover margin. Now they’ve lost 15 straight regular-season ACC games and are approaching a year since their last win.
“Maybe I’ll feel a little differently when I see the film,” Stallings said. “But I think we can play better than that.”
UNC: The Tar Heels were facing the possibility of their first four-game losing streak since February 2010, the only one of the Roy Williams era. And the past week in particular had been bumpy: There was an overtime home loss to North Carolina State last weekend, a loss at No. 20 Clemson on Tuesday and the suspension of freshman guard Jalek Felton from the university for unspecified reasons. This win — a get-right cruise in front of a friendly crowd — might have helped drain a bit of building tension.
FAMILIARITY
Pitt initially blocked Johnson’s attempt to move to UNC with immediate eligibility, citing an internal policy, before relenting last summer. He finished with 14 points.
“I tried not to look at this game any different, you know what I mean?” Johnson said. “Obviously you’re going to feel some things when you play against your former team. I spent three years there, I grew up in Pittsburgh, my dad played at Pitt, my mom went to nursing school there, and my brother is still doing research for the university, so obviously I have a pretty strong connection there.”
Stallings deflected questions afterward about Johnson.
“I don’t like to comment on other people’s players,” he said. “Ask Roy about how he played. I couldn’t tell you. I was worried about my guys.”
WILLIAMS’ JUMPER
Kenny Williams scored 15 points on 6-for-9 shooting, including 3 of 5 from behind the arc. He had failed to reach double figures in five of the past six games.
“I wasn’t thinking about the shots,” he said. “I was just stepping into it and doing everything that I’ve worked on.”
UP NEXT
Pittsburgh: The Panthers visit No. 20 Clemson on Thursday.
UNC: The Tar Heels host No. 4 Duke on Thursday night in the latest renewal of the fierce rivalry.
___
More AP college basketball: https://collegebasketball.ap.org and https://twitter.com/AP_Top25
___
Follow Aaron Beard on Twitter at https://twitter.com/aaronbeardap