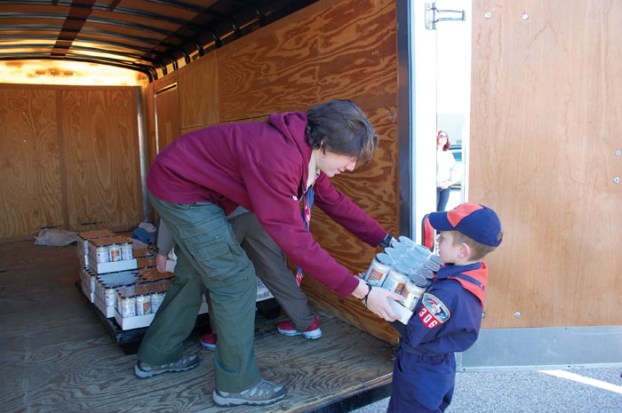 SALISBURY — By 8:45 a.m. Saturday, the parking lot of Food Lion No. 1 had multiple food pantry vehicles parked in it, waiting to be filled by eager Boy Scouts and volunteers.

The Scouts had come from all over Rowan County to participate in Scouting for Food, a national Boy Scouts program that collects and delivers nonperishable food to those in need.

She said he originally did the project in November but changed his mind when he found out that there’s a lull in giving in January.

“After the first of the year, everyone’s already given for their tax donations. Their heart has been full of love during the Christmas season. Then he looked and he said, ‘Well, it’s so cold out,’” Barber said. “A lot of people who are in things like construction, outside work, they’re out of work. They need it. The electric bills are bigger. And we’re looking at all of those needs.”

“So many families, they can’t help it, they live paycheck to paycheck. And if they’re out of work for a week, that may affect their family,” Barber said. “And if they need help getting food we should be the ones out here in the community helping them. And that’s what Scouting for Food is all about.”

Food Lion created Food Lion Feeds in 2014 for a similar reason — to help community members who struggle with hunger.

That’s one of the reasons Food Lion No. 1 store manager Robert Jackson said it was gratifying to help with the Scouting for Food initiative.

“It’s a fundamental point of our message that nobody should have to choose between food and paying their light bill or paying their rent or anything like that. That everyone in the community should be able to be fed,” Jackson said. “And (that) we can do our small part to do that’s pretty awesome.”

On behalf of Food Lion, Jackson delivered a giant check for 48,000 meals — or 12,000 pounds of food — to Barber and the Scouts from the Rowan County Sapona district in his store’s parking lot Saturday morning.

“I think it’s cool to sow back into the youth of today. It’s a noble task, to be able to feed people. And my interaction with them when we were unloading the truck, I mean, they’re all very positive, very upbeat, well-mannered young men,” Jackson said. “And they kept loading it back on. They were like, ‘Let me have another box!’”

He said he anticipates Food Lion will continue to work with the Sapona district Boy Scouts.

“Our interaction with them wasn’t just on this day. I think we’re building something with the Boy Scouts and I think we’ve really made a commitment on the local level,” Jackson said.

“So this year, since we started off the day with 12,000 pounds (from Food Lion,) we’ll probably greatly exceed last year,” Gettys said. “It’s basically like starting where we finished last year.”

Barber said Scouts and volunteers would collect 80 percent of donations Saturday and that the rest would be collected from churches on Sunday and some businesses on Monday.

For more information about the Sapona district’s Scouting for Food initiative, email Barber at annbarber739@gmail.com.

Food Lion No. 1 is located at 123 Mahaley Ave in Salisbury.