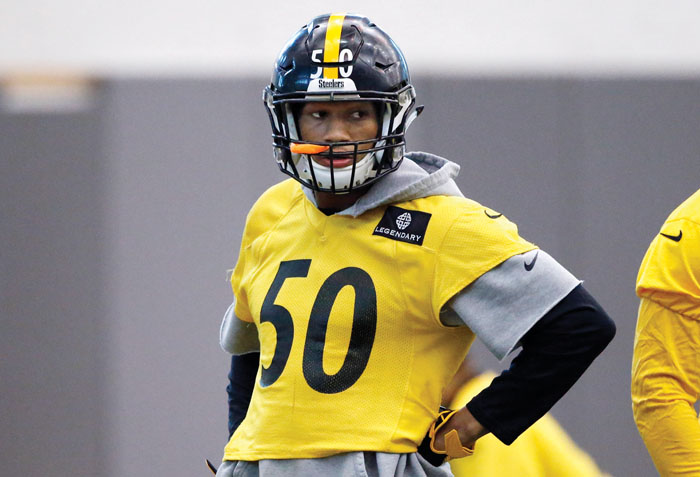 FILE - In this Jan. 14, 2016, file photo Pittsburgh Steelers linebacker Ryan Shazier (50) waits to run a drill during an NFL football practice in Pittsburgh. Shazier was released from the hospital on Thursday, Feb. 1, 2018, nearly two months after suffering a spinal injury in a victory over Cincinnati. (AP Photo/Gene J. Puskar, File)

Shazier was released from the hospital on Thursday, nearly two months after suffering a spinal injury in a victory over Cincinnati. The Pro Bowler underwent spine stabilization on Dec. 6 and while he was able to travel a bit, including visiting team practices and making appearances at Heinz Field for games, he returned to the hospital each evening.

The University of Pittsburgh Medical Center says Shazier will transition to an outpatient therapy program.

The 25-year-old Shazier posted a picture on Instagram of him standing alongside Steelers quarterback Ben Roethlisberger shortly after his discharge was announced. Shazier has his left arm draped over Roethlisberger’s shoulders and his right hand on something for support. Shazier thanked everyone from family to teammates to doctors to fans for their support and said he will “continue to work hard and push and find a way back.”

“I want everyone to know that I’m moving on to the next step of the process,” Shazier wrote.

Shazier has not disclosed the exact nature of his injury. He used a wheelchair as transport while attending team events following his surgery.

NOTES: The Steelers signed punter Jordan Berry to a one-year contract extension for the 2018 season on Thursday. Berry, 26, could have become a restricted free agent in March. He averaged 43.2 yards per punt in 2017, his third since taking over as the team’s punter.