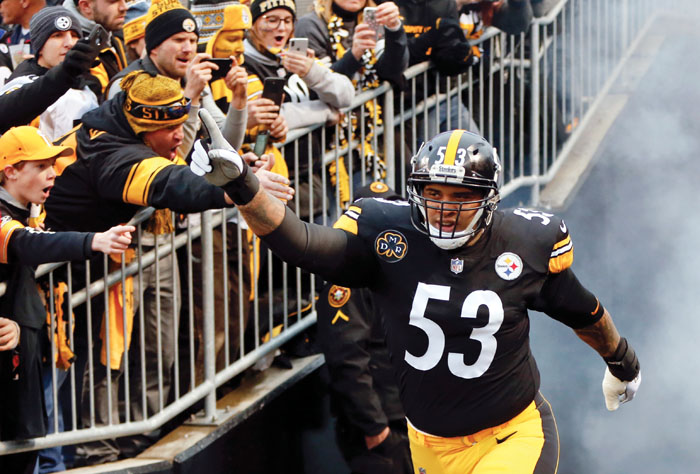 FILE - In this Dec. 17, 2017, file photo, Pittsburgh Steelers center Maurkice Pouncey (53) runs out to the field as he is introduced before the start of an NFL football game against the New England Patriots in Pittsburgh. NFL players who have protested this season have been in the minority, and protests waned as the season went on. Some players are focusing on ways of addressing injustice off the field. “If it affects that many people by taking a knee, just stand up, it’s that simple,” said Pouncey. “Taking a knee during the anthem, in my opinion, changes nothing. Giving back to the community, being around the kids and people in poverty, I respect that.” (AP Photo/Keith Srakocic, File)

A son who saw a police officer hold a gun to his father’s head. A husband whose wife was pulled over driving a Bentley.

These unsettling scenes are among the stories from some of the NFL’s marquee players, multimillionaires sharing tales of racial profiling by law enforcement. It is a troubling concern for people of color that has been at the center of the protests begun in August 2016 by former San Francisco 49ers quarterback Colin Kaepernick.

The protests have waned, but the ongoing issue for players — and the black communities they come from — has not.

The Associated Press surveyed 56 of the 59 black players at last weekend’s Pro Bowl game as part of its look at how African-American athletes have long used their sports platforms to effect social and political change. The AP asked the players whether they or someone they knew have ever experienced racial profiling.

“You can probably ask any black man out here and the answer is yes,” said Jacksonville Jaguars defensive tackle Malik Jackson. “It’s not like this is just starting today or a new thing. It’s gone on for a long time. I think African-American men have been (victims) of racial profiling for a long time, by either the things they wear or just by the color of their skin.”

In protesting, Kaepernick and others attempted to highlight the killings of unarmed black men by police, an issue brought into the national spotlight by Black Lives Matter activists after the shooting death of Michael Brown in Ferguson, Missouri , in 2014. But the message was quickly overtaken by fans offended by the players’ decision to kneel during the anthem.

“That was the main thing with the protests, to bring awareness so people know what’s going on,” said Jaguars cornerback Jalen Ramsey. “That’s the first step to trying to fix the situation.”

NFL players who have protested this season have been in the minority, and protests waned as the season went on. Some players are focusing on ways of addressing injustice off the field.

“If it affects that many people by taking a knee, just stand up, it’s that simple,” said Pittsburgh Steelers center Maurkice Pouncey. “Taking a knee during the anthem, in my opinion, changes nothing. Giving back to the community, being around the kids and people in poverty, I respect that.”

For many players, the issue is not one of patriotism, but rather it is personal.

“At the end of the day, we’re not trying to disrespect nobody,” said Jaguars cornerback A.J. Bouye. “No matter what happens, I feel like somebody is not going to be happy, but we have a lot of respect for our country and respect for the game.”

Bouye was among the players who recounted firsthand experience with racial profiling.

“My dad, when I was growing up … gun to his head and everything,” Bouye said. “That’s why it hits close to me. We know that there are issues going on, and maybe some people don’t want to bring awareness to them, but we’ll find a way.”

Tampa Bay Buccaneers defensive tackle Gerald McCoy said he, his father and his wife have all been victims of racial profiling — even after he became a successful athlete.

“It happened to my wife in the past couple of years,” said McCoy, who was drafted in 2010. “She got pulled over. She was driving a Bentley. Nice neighborhood, and they pulled her over. All her stuff was right and they just didn’t have any reason. It just wasn’t right.”

Black athletes have been finding a way to fight for social change for more than 100 years, from Jack Johnson to Muhammad Ali to Kaepernick.

Their fights have come at great personal expense, from alienation by fellow Americans to incarceration to the loss of their careers.

NFL players faced backlash of their own in 2017.

During the season, President Donald Trump referred to the players as “sons of bitches” and suggested they be fired. And Trump again condemned the protests in his State of the Union address on Tuesday night, juxtaposing the campaign against the patriotic efforts of a white child who has planted thousands of American flags on the graves of veterans.

Players have pointed out that the protests are allowed under free speech, one of the cornerstones of American democracy. Martin Luther King Jr. framed civil disobedience as a commitment to conscience tied to founding revolts of our country like the Boston Tea Party.

The issue has loomed over the entire NFL season, which culminates with Sunday’s Super Bowl. And a year into his presidency, Trump’s Department of Justice has abandoned talk of police reform in favor of support for law enforcement and criticism of activists.

Of the players surveyed at the Pro Bowl, 42 said they would support the idea of the NFL going back to keeping teams in the locker room until after the anthem is played, a practice that was changed in 2009 — not that they believe they have much say in what decision league owners will make.

Goodall reported from Orlando. Whack is The Associated Press’ national writer for race and ethnicity. Follow her work on Twitter at http://www.twitter.com/emarvelous

EDITOR’S NOTE: African-American athletes have used their sports platforms for more than 100 years to impact social and political change. As part of AP’s coverage plans for Black History Month, we will take a multiplatform look at how many have and continue to engage in activism, from Jack Johnson, to Muhammad Ali to Colin Kaepernick.