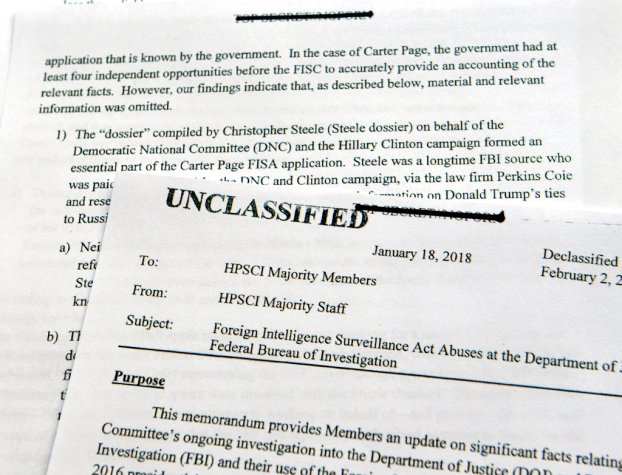 A intelligence memo is photographed in Washington, Friday, Feb. 2, 2018. After President Donald Trump declassified the memo, the Republican-led House Intelligence Committee released the memo based on classified information that alleges the FBI abused U.S. government surveillance powers in its investigation into Russian election interference.(AP Photo/Susan Walsh)

Ed Rogers is a contributor to the PostPartisan blog, a political consultant and a veteran of the Ronald Reagan and George H.W. Bush White Houses and several national campaigns. He is the chairman of the lobbying and communications firm BGR Group, which he founded with former Mississippi governor Haley Barbour in 1991.

As interesting as the “Nunes memo” is, everything it reveals occurred before Robert Mueller was appointed. How does anything in the memo impact the validity of the special counsel’s investigation?

Well, it matters that the pre-Mueller Justice Department investigation was prompted by anti-Trump, pro-Hillary partisans who used U.S. law enforcement in an effort to derail the Trump campaign. So, determining what Mueller knew and when he knew it is an essential and relevant question. When did Mueller realize he was at the helm of an investigation tainted by illegitimate roots? If he doesn’t think it matters, he needs to explain why.

Part of what makes the memo from House Intelligence Committee Chairman Devin Nunes, R-Calif., significant is that it confirms the presence of an anti-Trump, pro-Clinton cell operating at the highest ranks of the FBI. Based on the past year of reporting, we know that the partisan cabal included the likes of Obama-era Attorney General Lorretta Lynch, former FBI deputy director Andrew McCabe, former FBI counterespionage section chief Peter Strzok, former associate deputy attorney general Bruce Ohr and perhaps others.

Democrats won’t admit it, but the memo reveals that the U.S. presidential election appears to have almost been hijacked — not by the Russians or the Trump campaign colluding with the Russians, but by Clinton campaign agents colluding with anti-Trump allies within the FBI. Their efforts were partially fueled by Clinton campaign opposition research. They used a slew of lies and distortions they deployed in an attempt to pursue the Trump campaign.

With that said, it is worth remembering that the Democrats’ dossier wasn’t determinative in launching the entire Russia probe. But the revelation of its use does expose anti-Trump individuals in the FBI and confirm their anti-Trump biases. They took a phony document and used it to advance their own political objectives. It is fair to ask: What else did they do?

I always thought it was kind of weird to begin with that then-FBI Director James Comey briefed President-elect Donald Trump about the dossier. And now, I wonder whether he might have done it as part of an effort to cover the anti-Trump faction’s tracks or to at least gently reveal that the dossier was being used by the government. I guess no one told Trump the dossier had already been used against his interests in an official government proceeding.

Anyway, it is going to take some time to process the impact of the Nunes memo. But it can’t just be dismissed with a shrug. Was Mueller ever going to report that the FBI colluded with anti-Trump forces to undermine the Trump campaign by relying on information supplied via anti-Trump foreign nationals paid by the Clinton campaign? The Nunes memo challenges the entire premise of the special counsel’s investigation — especially if there is now a serious inquiry about whether the president obstructed justice of an investigation that was inappropriately initiated by the government in the first place.

I was respectful of the FBI’s objections to the memo being released. But now that I have read it, I wonder why they made a big deal about revealing sources and methods. I don’t see any of that. The memo is a consequential expose of the malice and wrongdoing of certain partisans within the FBI. Granted, the information in the memo is being disputed by some as incomplete and inaccurate. We will see.

From what I hear, the FBI inspector general’s report is due anytime, and it will be an additional powerful indictment of many inside the FBI.

The bottom line is this memo further confirms that somebody colluded with the Russians, that somebody withheld material information from government officials and that somebody even used laundered money to pay for campaign dirt that was partially supplied by Russian agents. That somebody wasn’t the Trump campaign. That should matter a great deal to Mueller. So where does this investigation go from here?

Ed Rogers is a political consultant and a veteran of the Ronald Reagan and George H.W. Bush White Houses and several national campaigns.

Jennifer Rubin: After all the memo drama, this is it?