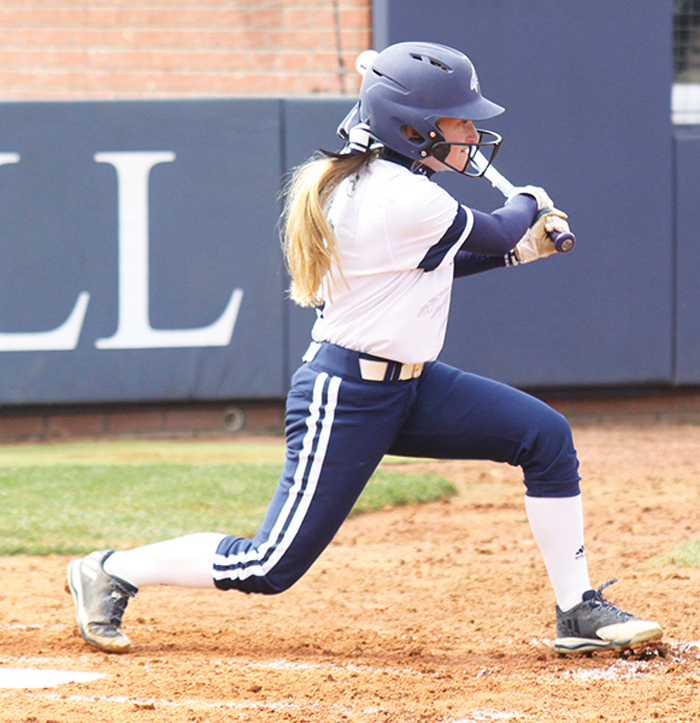 Taylor Martin, a former three-sport star at West Rowan High School, is ready for her sophomore season on the Catawba College softball team. The season opens on Saturday, at home against Augusta. Catawba sports information photo

SALISBURY — When you’re picked to finish 11th in an 11-team league, there’s no shortage of motivation to prove the coaches in the South Atlantic Conference wrong.

The members of Catawba’s softball team also are armed with motivational jewelry, bracelets with the letters W.W.A.D.  Those initials are shorthand for “What Would Adrian Do?”

This is a softball season that will be dedicated to former assistant coach Adrian Whitley Gantt, whose contract was not renewed.

The wife of Catawba baseball coach Jim Gantt, the daughter of Catawba head coach Nan Whitley, and a newly inducted Catawba Hall of Famer, Adrian provided much of the fire and drive for the softball program for many years.

“This season is going to be for Adrian,” Catawba sophomore Taylor Martin explained. “She still means so much to us, and we hate that we won’t have her on the field  this year. Adrian’s favorite expression was to empty the tank and we’re planning to empty the tank for her this season. That means we’re going to leave it all out there — every game. This season won’t be anything like last season.”

Catawba’s 2017 season crashed before it got off the runway. The Indians were determined to move on after losing four-year ace pitcher Carley Tysinger, one of the most dominant players in school history, but injuries happened, bad luck happened, two freshmen had to carry the load in the circle, and the program nose-dived from 39-16 to 11-40 in a hurry.  It was tough for veterans who had usually won to lead a team that suddenly wasn’t winning at all. Catawba began the season with a rugged road trip and was 0-9 in the standings by Valentine’s Day. Catawba never got back on its feet in a nightmare season and went 2-18 in the SAC.

“We actually played some of our best ball on that first road trip, played well but still lost competitive games against very good teams,” Martin said. “We tried to come back from that slow start, but errors hurt us and those errors hurt  the confidence of our young pitchers. Offensively, we could get hits, but we didn’t get many hits with people on base. The season just went downhill.”

Martin, who played on championship basketball and softball teams at West Rowan, batted .307 and started games at four different positions for the Indians as a freshman, —  third base, shortstop, left field and right field. That admirable versatility earned Martin the utility spot on the second All-SAC team, but it also indicates Catawba rarely had the luxury of a set lineup. That should change this year. Martin has been installed as the second baseman. That’s where she spent three years in high school before moving to center field as a senior.

“I like outfield the best, but I know second base is where I fit best in the infield,” said Martin, a 5-foot bundle of energy. “The important thing is we have a good player for every spot. We’re going into this season solid everywhere.”

It has to start in the circle if the Indians are going to bounce back. It might be 50 years before Catawba finds another Tysinger, but at the very least they will have a lot more pitching options. Sophomore Brooke Walser (8-18, 4.29 ERA) is back after a year of learning under fire. Preston Ellenberg, 2-1 in 2016, is healthy after missing last season. Anna Jasper, a 5-10 hurler, transferred to Catawba from UNC Pembroke. Freshman Madison Hunter (Gray Stone) has a devastating changeup. Former A.L. Brown standout Kaylee Cook (2-17 as a freshman) may be used in relief some, but the Indians are planning to employ her mostly as an outfielder. Cook has the bat to make that transition.

“Our pitching is going to be so much better,” Martin said. “We’ve got five healthy arms this time, and we’re going to able to use them depending on the matchups and the situations.”

Martin votes for shortstop Jordan Dean, as the newcomer most likely to be a difference-maker for the Indians. The freshman was an All-State player at South View High in Hope Mills. Martin, who was Catawba’s shortstop at the end of last season, believes Dean will transform the Indians defensively.

“She’s tall, she gets to so many balls, and her arm is just awesome, just unbelievable,” Martin said. “So we go from having a 5-foot girl at shortstop to having a 5-foot-8 girl with a lot of range. She’s going to be really good.”

If Catawba does fight back to respectability — and more — this year, Martin will be at the heart of it. She was the only Indian picked on the preseason All-SAC squad (second team). She’s a two-sport athlete at Catawba, and both volleyball and softball have become almost year-round sports at the D-II level. Volleyball season is officially over, but workouts continue. There are a lot of days that Martin is heavily involved in both sports.

“A typical day for me is class, volleyball workout, more class, and then softball practice,” Martin said. “A lot of times I’m running from a class to a sport, still throwing on my clothes, but I think going hard all the time helps keep me focused and keeps me at my best. I’d rather be competing than just sitting around.”

Nan Whitley has guided Catawba softball since 1983 and returns for another season of coaching on the field that’s named for her. Fast-pitch softball didn’t start until 1990, so she’s coached every fast-pitch pitch game Catawba ever has played. Shane Prescott, who has been around since 2007, returns as an assistant coach.

A new season and a chance for redemption starts this Saturday at Whitley Field. Catawba hosts Augusta in a doubleheader starting at 1 p.m. Catawba opened last season at Augusta.

Martin, already one of the team leaders, despite being a sophomore, doesn’t guarantee victory on Saturday, just that the Indians will give everything they have.

“We’ll empty the tank,” Martin said. “I can promise that.”