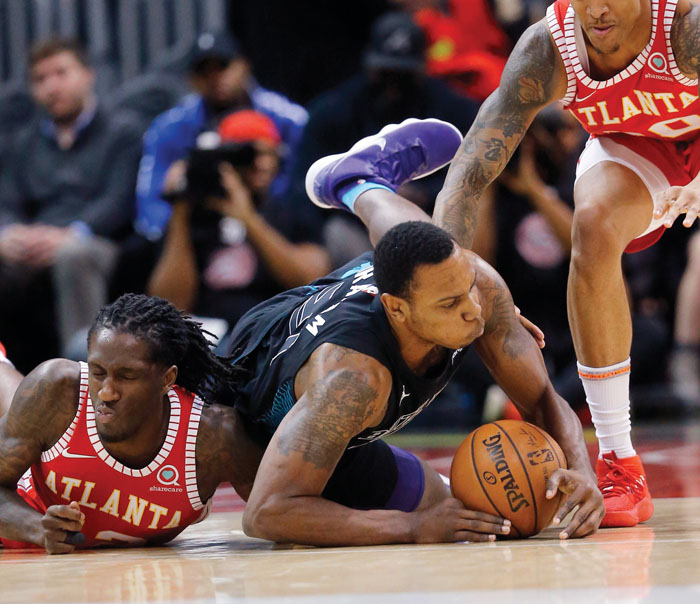 Charlotte never trailed while building double-digit leads in each half.

Dwight Howard had 20 points and 12 rebounds in his first return to Atlanta after his one season with his hometown Hawks. It was Howard’s second double-double in less than a week against the Hawks. He had 18 points and 15 rebounds in Charlotte’s 121-110 win over the Hawks on Friday.

Nicolas Batum had 10 points, 11 rebounds and 10 assists for Charlotte.

Dennis Schroder’s basket shrunk the Hornets’ lead to 77-76. Walker answered with a 3-pointer that started his scoring streak that carried through the end of the third period.

The Hornets’ lead was back to 13 points entering the fourth.

The win was already decided when Howard added powerful jams over Ersan Ilyasova and Mike Muscala in the fourth.

Hornets: F Marvin Williams (left ankle sprain) was held out. X-rays were negative after he left the fourth quarter of Monday night’s loss to Indiana. Frank Kaminsky started for Williams, who may miss another game. … The Hornets wore their black “Buzz City” alternate uniforms. … Charlotte has won the first three games of the four-game season series.

Hawks: Schroder had his right shoulder wrapped as he sat on the bench at the end of the third quarter, but he returned about four minutes into the final period and had 13 points and nine assists. … Budenholzer said F DeAndre Bembry (left abductor strain) was making progress but there was no change in his status. … Muscala started the second half instead of Miles Plumlee and hit a 3-pointer on the team’s first possession following the break. … Marco Belinelli, who had 22 points, made his first four 3-pointers before three misses.

During the first timeout, fans had a mixed reaction to a tribute to Howard. There were boos and some cheers when the Hawks posted an image of Howard on the video board with the message “Thanks for being true to Atlanta.” There was another mixed reaction when the PA announcer urged fans to “give it up for Dwight Howard.”

There were a few boos during Howard’s pregame introduction.