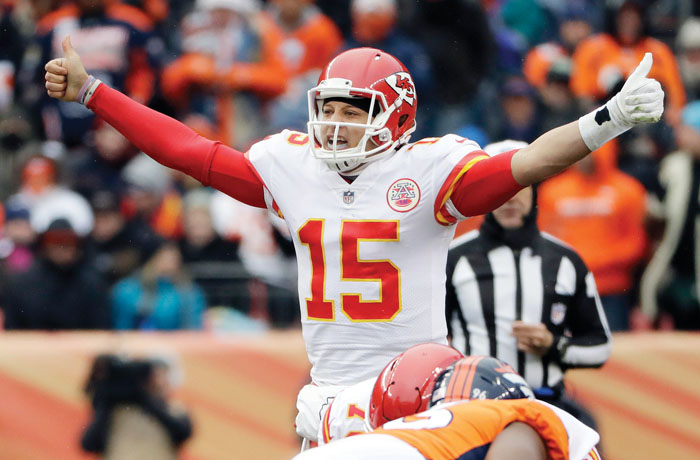 FILE- In this Dec. 31, 2017, file photo, Kansas City Chiefs quarterback Patrick Mahomes (15) signals against the Denver Broncos during the first half of an NFL football game in Denver. The countdown to the Mahomes era in Kansas City is down to six weeks, with no apparent caveats. The Chiefs' trade of Alex Smith to Washington becomes official in March, but already the Chiefs are preparing for life under a new QB. (AP Photo/Joe Mahoney, File)

KANSAS CITY, Mo. (AP) — The countdown to the Patrick Mahomes II era in Kansas City began the moment the Chiefs traded up to select the strong-armed quarterback in the first round of last year’s draft.

Officially, it is down to about six weeks.

Practically, it has already reached zero.

The Chiefs agreed to trade veteran quarterback Alex Smith to the Washington Redskins late Monday, a deal that will become official with the start of the new league year on March 14. In doing so, the Chiefs made a bold statement that they’re ready for Mahomes, a prolific passer during his college days at Texas Tech, to assume the starting job for the foreseeable future.

Mahomes dazzled coach Andy Reid and his staff during training camp, making the kinds of downfield throws that Smith could never accomplish. And when he made his regular-season debut in Week 17, when the Chiefs were already assured of the AFC West title and the No. 4 seed in the playoffs, he not only played well but returned in the fourth quarter to lead the winning drive against the Broncos.

It was the kind of performance — and the kind of moxie — that made Reid draw comparisons to another of his protégés from his days with the Packers: Brett Favre.

Those are big shoes to fill. Then again, so are the ones Smith is leaving behind.

For all the angst he caused fans by going 1-4 in the playoffs, Smith succeeded in stabilizing a franchise that had been turning over quarterbacks for years. He went 50-26 as a starter and made a couple of Pro Bowl appearances, setting a slew of franchise records in the process.

“Alex, you are the definition of a true leader and your professionalism helped me grow as a player,” Chiefs offensive guard Laurence Duvernay-Tardif said in a statement posted to Twitter.

“Can’t say enough about the type of friend and teammate Alex Smith has been since getting to Kansas City,” Chiefs fullback Anthony Sherman said, adding “the Sherman family will miss the Smith family.”

Yet the Chiefs knew they were going to move on from Smith in part because of the hefty price tag that came with the final year of his contract. And his strong performance last season made Smith a hot commodity with at least five teams along with the Redskins.

That bidding war, even this early in the offseason, drove up the Chiefs’ asking price.

They wound up solving more than one problem in the trade with Washington: The Chiefs, drained of draft picks by previous trades, got a third-round choice in April; they acquired Kendall Fuller, one of the league’s top slot cornerbacks and a potential starter on the outside opposite Marcus Peters; and they freed up nearly $16 million in salary cap space to make additional moves in free agency.

Kansas City now has a pick in the second round and two in the third, along with selections in the later rounds, which could be used to address other pressing issues on defense.

Fuller certainly addressed one of them. He was a first-round talent who dropped to the third round coming out of Virginia Tech because of injury concerns, yet has played to a first-round grade — and stayed healthy — during his first two seasons with in the league. Scot McCloughan, the former Redskins general manager who drafted him in 2016, said on Twitter shortly after news of the trade broke: “I would never have traded Kendall. He can play inside and outside, he’s high character, young and a football player.”

The Chiefs are expected to free up additional cap space by restructuring or moving on from some of their veterans, such as linebackers Tamba Hali and Derrick Johnson.

That in turn gives them some financial flexibility to sign some of their young stars to long-term deals — Peters and wide receiver Tyreek Hill, for example — or pursue help for their shortcomings in free agency.

They could still use help in the defensive backfield, linebacker and pass rush remains an issue, the offensive line needs additional depth and the wide receiver corps could use another target.

Now that the Chiefs have found a trade partner for Smith, the work in those areas begins.