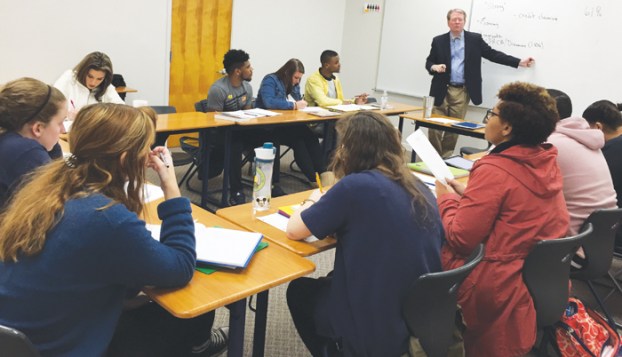 Dr. Michael Bitzer and 12 Catawba Students in the Presidential Politics class discuss the president's State of the Union address. Students gave the address a grade of "C," for a confident approach that "crossed the line into arrogant." Andie Foley/Salisbury Post

SALISBURY — If they were grading President Donald Trump’s State of the Union address, students in the Presidential Politics class at Catawba College said they would have given him a “solid C.”

The consensus was reached Wednesday as students met to discuss what they considered the highs and lows of the speech with political science Professor Michael Bitzer.

Students said the president was calm and confident but that at times his confidence crossed the line into arrogance.

The students cited Trump’s moments of self-applause and “credit claiming.”

Other students took issue with Trump’s use of “representatives” for key issues: real people in the gallery who were used to exemplify struggles and successes.

The president was exploiting trauma and using fear tactics, the students said.

“They were just outliers,” said Sarah Horne. “Those aren’t typical cases, any of them. Those are just the extremes he brought in.”

Others said Trump’s play to pathos was to be expected.

“At the end of the day, you have to understand he’s a businessman,” said Reginald Pulley II. “He’s going to get to you what sells.”

The students criticized Trump’s four-pillared approach to immigration reform. One class member, Yamilex Mendoza, said his first pillar — offering a path to citizenship for 1.8 million people — was nothing new.

Mendoza said her parents immigrated from Mexico and that Trump’s years-long plan would change little.

“In order to start the process, do you know how long it took (my parents) just to get clear to even take the exam? It took them five years,” said Mendoza. “It takes 10 years to get a visa, sometimes even longer. I had a cousin on the waiting list for 15 years. He’s in his 30s and he has kids now.”

Overall, the students said the speech was geared toward unity and nationalism. Both are hard to achieve in a world so divided, they said.

“Sixty-one percent in an NPR Marist Poll said that Donald Trump has further divided the country than it was before he became president,” said Bitzer.

Pulley said Trump has brought this on by allowing racist, derogatory commentary at his political rallies.

“That’s only rubbing salt in the wound,” she said.

Pulley disagreed, saying that Trump needs to be held accountable for his words and actions. In a sense, he said, pain from salt in a wound will affect the way people vote in the future.

In the end, the president was lauded for his ability to “rally the people” through emotional appeals and docked for his tactics in doing so.

But, said Bitzer, such tactics are part of Trump’s modus operandi.

Trump warns of immigration dangers in State of the Union address