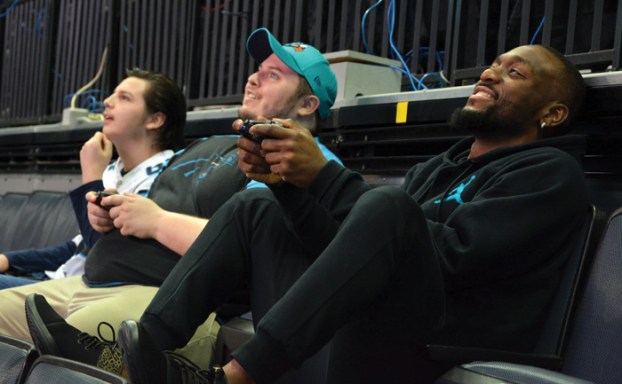 From seats in the Charlotte Hornets' Spectrum Arena, Vincent Spillman, center, plays a video basketball game with Hornets guard Kemba Walker, right. They are playing from seats in the arena, and the game is being shown on the the giant screen overhead. Watching on is Vincent's brother Michael. Photo courtesy of Vincent Spillman

The sting: In a video game face-off, Hornet star beats one of his biggest fans

SALISBURY — There they were, leaning back and thumbs flying like any good friends playing a basketball video game.

But this matchup was a bit different. First, they were playing on a massive screen above center court at the Spectrum Center in Charlotte.

Walker showed no mercy on Spillman, one of the Hornet star’s biggest fans.

“Kemba got into it, and he was having fun,” Spillman said from his Salisbury home Monday. “He beat me. I was winning by about 10, then he beat me.”

The game was played a week ago during a Hornets off day. The previous night, Walker had led the Hornets with 26 points in their 112-107 victory over the Sacramento Kings.

Accompanying Spillman to Charlotte was his dad, Edward, and Vincent’s younger brother, Michael, 14.

Vincent won a Hornets-sponsored contest that offered the person selected a chance to play the video game “NBA 2K18” with Walker.

A diehard supporter of the Hornets, Spillman almost missed out on the opportunity. At first, he didn’t see an email from the Hornets notifying him of his selection. He also intentionally ignored a call from the club’s staff, thinking the unfamiliar phone number was a telemarketing pitch.

He finally noticed a message to him from the Hornets on his Twitter account, and he was urged to contact the club as soon as possible or risk seeing the prize of playing with Walker go to someone else.

Spillman answered in time, and it’s a good thing — he actually had forgotten he had entered the contest.

A member of the Hornets staff was recording Spillman and Walker as they duked it out, and Spillman thinks an edited video of their match might show up eventually on the Hornets Twitter feed.

They sat in seats near the media tables. As they played, Walker wasn’t entirely happy with the way the video game seemed a bit out of sync with the big screen overhead.

But once Walker figured out the lag time, he made his charge and beat Spillman by six points. Spillman was playing as the Hornets; Walker, as the Oklahoma City Thunder.

Spillman took the loss in stride. He enjoyed the overall experience, which included a tour of the Spectrum Center, a visit to the fan shop and Walker’s signing of several items, including a new Hornets jersey.

After the video game between Vincent and Walker was over, young Michael was given a chance to play on the big screen. Vincent played that game as the New Orleans Pelicans, who were the Hornets’ opponent the next night.

It so happened Rajon Rondo, the Pelicans’ point guard, was on the Spectrum floor taking some practice shots as Michael and Vincent played. In the video game, Vincent made a nice assist playing as Rondo, who approvingly witnessed the pass.

“And Rondo pointed back at me,” Vincent said.

Academically driven, Spillman graduated from East Rowan High School in 2016, and thanks to having started college courses while still in high school, he earned his bachelor’s degree in criminal justice and homeland security from Liberty University last May, when he was only 19.

He’s now going for his master’s degree in public policy and plans to attend law school.

At East Rowan High, Spillman played as an offensive lineman in football, his favorite sport. But he also has been seriously following the fortunes or misfortunes of the Charlotte Hornets since middle school.

When he played the video game with Walker, Spillman wore a Carolinas Panthers shirt and a Hornets hat.

He gained some inside information during his buddy time with Walker.

Does anyone really believe Spillman played a video game with Walker?

“My family definitely believes it,” Vincent said. “My friends … they believed me when I put it on Twitter.”