Big flavors for the big game 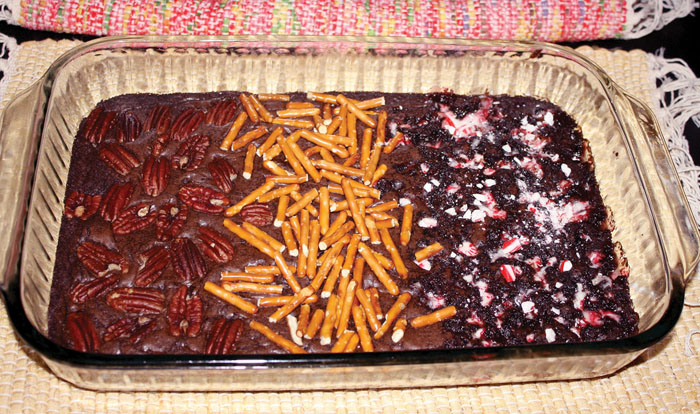 Deirdre Parker Smith/Salisbury Post Make a pan of brownies and use three different add-ons for a variety of flavors.

If you’re having a party to watch the big game, even if it’s just for the commercials or half-time show, you gotta crank out some big food.

But remember the cheese coma you slipped into last year? The salt overload from all those chips? The lingering grease from the wings and dip?

Americans are predicted to eat 1.33 BILLION chicken wings this Sunday, which will surely be driving up the price of what used to be a cheap food.

Another hugely popular food is pizza, which makes up 60 percent of all take out ordered on that day, or roughly 12.5 million pizzas. And, about 8 MILLION pounds of guacamole is eaten, with 28 million pounds of chips.

Talk about needing a diet, whew!

Try it a little lighter this year.

Shift the focus from big meat to chicken, and from simple carbs to ones that have more vitamins and minerals.

Below we offer recipes for a chili that can be ready in about 30 minutes, and other snackables that have a tiny bit less of what weighs you down the day after. Emphasis on quick and uncomplicated. There’s one splurge, and it’s ridiculously easy.

Stock up on ingredients now. Can you imagine what the grocery store will be like Saturday?

1 jar salsa verde (such as Herdez)

Shred half of the rotisserie chicken with two forks and set aside. Chop onion into a medium dice. Mince garlic clove. Open the chilies, beans and tomatoes. Drain the black beans and cannellini beans. Use a knife to break up the tomatoes in the can. Do not drain.

Heat the oil in a Dutch oven until shimmering, over medium heat. Add the chopped onions and a pinch of salt and cook until softened and translucent, about 5 minutes. Drain chilis but retain the liquid. Add chilis and minced garlic to the pot. Then add the spices, stirring the mixture until you can smell the aroma of the spices. Add liquid from canned chilis. Add juice from the tomatoes and tear the tomatoes apart with your fingers before adding. Add the jar of salsa verde, then the beans. Stir and let simmer together for 10 minutes.

Add chicken and simmer another 10 minutes to warm through.

Serve with tortilla chips, a lime wedge, sour cream, grated cheese and if you like heat, pickled jalepenos.

This chili has a real tangy kick from the tomatillos in the salsa verde.

This recipe will serve 4-6. It’s easy to double, just use the whole chicken, twice the onion and spices and 2 cans of tomatoes and more beans. One jar of salsa verde may be all you want, though, so add a can of tomato sauce if you need to make the larger batch. Deirdre Parker Smith/Salisbury Post Surprise your guests for the big game with this tangy chicken chili. A jar of salsa verde gives the chili a bright flavor.

Finely chop mushrooms, onion, celery and garlic in a food processor. Heat oil in a large skillet over medium-high heat. Add the vegetable mixture and cook, stirring occasionally, until the liquid has evaporated, 6-8 minutes. Transfer to a large bowl and let cool for 10 minutes.

Preheat oven to 450. Line a large rimmed baking sheet with foil and coat with cooking spray.

Add breadcrumbs, carrot, cheese, hot sauce, vinegar, salt and pepper to the cooled vegetables. Stir until combined. Add chicken and mix gently to combine. Do not overmix. Form into 30 meatballs (a scant 2 Tbsp. each) and place on the baking sheet. Bake until an instant read thermometer inserted in the center register 165 degrees, about 15 minutes.

These can be made ahead and frozen, then reheated in a 350-degree oven for 25 minutes.

Can substitute ground turkey for the chicken.

Serve with slices of carrot and celery and ranch or blue cheese dressing.

Preheat oven to 425 degrees. Heat oil in a large cast iron skillet over medium high heat. Add sweet potatoes and 1/4 tsp. salt. Cook, stirring occasionally, until beginning to brown, 5-7 minutes. Transfer the pan to the oven and bake until the sweet potatoes are soft, 15-20 minutes.

Meanwhile, combine sour cream, lime juice and the remaining pinch of salt in a small bowl.

Top the sweet potatoes with corn, cheese and beans. Continue baking until the cheese is melted,about 5 minutes. Top with tomatoes, scallions and avocado. Drizzle with the sour cream mixture and sprinkle over cilantro, if using.

If the only spinach tortillas you can find are the 10-inch size, you will probably only need two. If they are smaller, perhaps three or four.

Mix the pesto and mayo together and spread over the tortillas. Add the turkey and the cheese, which has been sliced in thin strips. top with baby spinach and scallions, either diced or slice into 3-inch long sections.

Roll the tortillas up and wrap in plastic wrap. Refrigerate at least 1 hour or overnight. Slice crosswise and arrange on a plate with slices of red pepper.

Variation: Instead of pesto and mayonnaise, use your favorite hummus.

Variation: Use long, thin slices of cucumber instead of tortillas for the roll-ups.

1 box of your favorite brownie mix

Prepare brownie mix according to package directions. Look for one that will fill a 9-by-13-inch pan.

Break pretzel sticks into smaller pieces, but do not pulverize. Leave nuts whole. Using a meat tenderizer or the back of a heavy knife, break up the peppermint. Use leftover candy canes, if you have them.

Bake according to package directions.

If your candy pieces are small enough, they will melt into the brownie and create a crunchy, minty topping.

Nuts will brown during the cooking time.

Dr. Gary Chapman speaks at Chamber breakfast: ‘All you…