Great moments in past State of the Union addresses, real and fictional 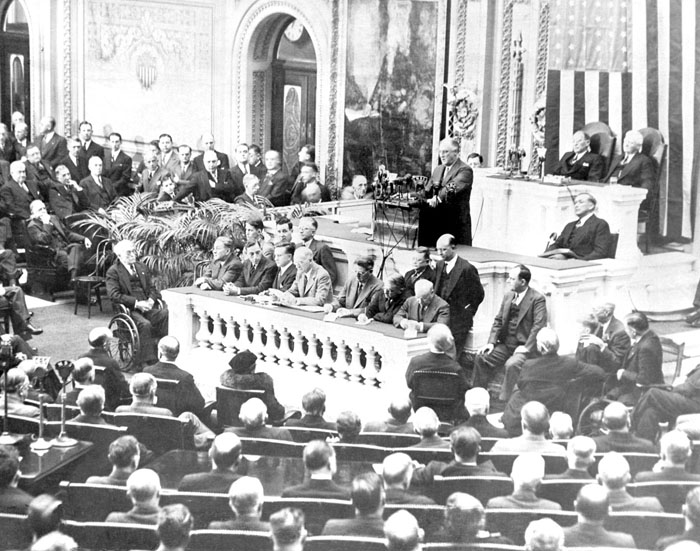 “From time to time,” the Constitution tells us, the president shall give to Congress “information” relating to “the State of the Union.”

On the surface, that seems clear enough. But a surprisingly fluid history lies behind one of our most familiar democratic rituals. What kind of information? How often?

George Washington, who delivered an “Annual Message” every year beginning in January 1790, took those questions seriously. But later presidents did not always follow his precedent.

Thomas Jefferson abandoned the practice of speaking before Congress, instead sending written messages. Not until 1913 did a president (Woodrow Wilson) return to address Congress in person.

The phrase “State of the Union” did not become the official title of the speech until 1947, the first year it was televised. As viewership grew, so did the length of the speech. The result is often as exhausting as it is edifying, with seemingly all known federal officials (save the designated survivor) crammed into the House chamber and all known policies crammed into the text.

Still, there are a few memorable examples of a State of the Union — real and fictional — with enduring relevance.

Lincoln’s gift for language shone through this address, which achieved bursts of poetry amid long stretches of prose about the war effort and dry topics such as the mineral resources of the western territories. “Last best hope,” which gave a glimpse of the Gettysburg Address to come, is still cited routinely by Lincoln lovers. A forgotten section of the address speculated on how large the United States would be in 1930.

For that year’s annual message, FDR did something almost unthinkable. By defining the “Four Freedoms,” he soared out of the usual tedious roster of domestic initiatives and gave a darkened world a bit of candlelight. As he spoke, Adolf Hitler was ascendant, yet there were tremendous political pressures on Roosevelt to keep the United States out of the war. To inspire the world and unite Americans, he needed a memorable concept that would ring out long after the speech was over.

A single page in the National Archives holds an early draft by speechwriter Samuel Rosenman that outlined four basic human rights: freedom of speech, freedom of worship, freedom from want, freedom from fear. From that sheet, we can trace a trajectory that defined America for half a century, including the global crusade to crush the Axis, the Universal Declaration of Human Rights and America’s long history as a beacon to the oppressed.

“State of the Union,” directed by Frank Capra

In this classic 1948 film about presidential campaigns, there’s no victory for the lead character, played by Spencer Tracy. So there is no State of the Union speech. But it does reflect on a different kind of union: the marriage portrayed by Tracy and Katharine Hepburn, who are superb, as usual, in this hard-nosed depiction of politics. And there is a powerful, spontaneous speech near the end, when Tracy’s character protests an attempt to muzzle him, claiming that he has paid for the microphone — a line later adapted to great effect by an actor turned politician, Ronald Reagan.

With his telegenic looks and communicator instincts, Reagan was a natural on the grand stage of the State of the Union. In 1982, he pioneered a now-standard practice by introducing a hero to the crowd. Lenny Skutnik was a government employee who had jumped into the icy Potomac to rescue a drowning woman two weeks earlier. The crowd gave him a standing ovation. Since then, one of the most lively moments of any State of the Union occurs when the cameras pan over to the presidential box to see this year’s heroes, now known as “Lenny Skutniks.”

This episode of the brilliant HBO comedy tracks a teleprompter failure at the start of a State of the Union, when President Selina Meyer, played by Julia Louis-Dreyfus, sees nothing but /: on the screen in front of her. Her verbal contortions lead an aide to exclaim, in horror, “She’s bebop speaking!” But in the end, her mangled sentences prove not that much worse than a standard address. A sample: “I’m asking you to meet me at the station and join me as we board a train bound for a place called ‘the future.’ ”

As with so many things, Washington blazed the path for all others to follow. However, by writing a speech that was short, intelligible and relatively apolitical, he set a standard so high that it’s unachievable in the modern era.

Ted Widmer edited the two-volume set “American Speeches” for the Library of America.

President Donald Trump will deliver his first State of the Union address at 9 p.m. Tuesday.