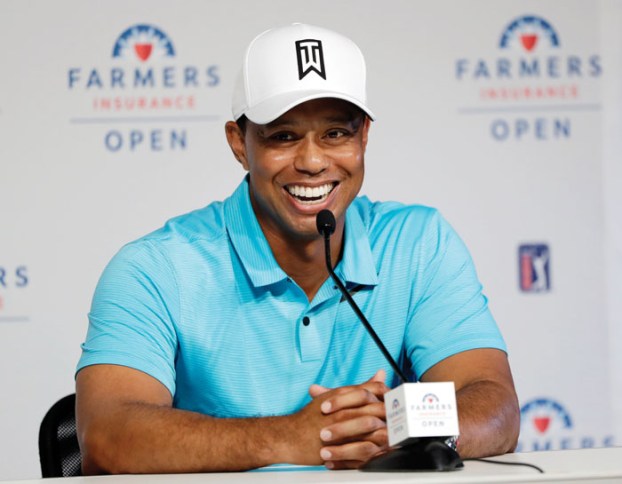 Tiger Woods confident his back will hold out this time Tiger Woods gestures as he walks to the green on the first hole of the north course at Torrey Pines Golf Course during during the pro-am event at the Farmers Insurance Open golf tournament, Wednesday, Jan. 24, 2018, in San Diego. (AP Photo/Gregory Bull)

SAN DIEGO (AP) — Tiger Woods is more confident than ever that his return to the PGA Tour will be different this time.

It’s not so much how he plays, but rather for how long.

“I have no more pain in my back,” Woods said Wednesday.

That wasn’t the case a year ago. Woods was coming off the longest break of his career following two back surgeries when he played the Hero World Challenge and showed promise by making 24 birdies against an 18-man field with no cut. But then he missed the 36-hole cut at Torrey Pines, and lasted one round in Dubai before withdrawing with back spasms.

Fusion surgery on his lower back followed two months later, and now Woods is on the same track as he was last year — with one exception.

“I was trying to manage the disk and the vertebrae,” Woods said after his pro-am round in the Farmers Insurance Open. “But it’s all finished now. It’s fused, and the quality of life is infinitely better than it was last year at this point.”

He looked just as strong, just as healthy, as he did in the Bahamas last month. Woods began and ended the pro-am with an approach to a few feet for easy birdies.

The real test begins Thursday at a tournament he has won seven times, not including his U.S. Open title in 2008.

This will be only his second PGA Tour event since August 2015.

Woods is known for saying that he shows up at every tournament expecting to win, though time — not to mention four back surgeries in nearly four years — has tempered his expectations. He concedes he has competitive rust, at least compared with the players he will try to beat.

“I just want to start playing on the tour, and getting into a rhythm of playing a schedule again,” Woods said. “I haven’t done that in such a long time, so I don’t know what to expect. Just go out there and just play. I’m going to grind.”

Woods used to be able to look at a golf course and have a reasonable idea what kind of score it would take to win.

That’s no longer the case, mainly because of the competition.

He has played only one tournament with Jon Rahm, the 23-year-old Spaniard who won last week in the California desert and can move to No. 1 in the world if he can defend his title at Torrey Pines. Woods met him for the first time this week.

Woods begins on the South Course on Thursday with Charley Hoffman and Patrick Reed. The South is the stronger of the two courses, having hosted the U.S. Open, and it’s where Woods has taken control the seven times he won the PGA Tour event here.

He was so predictably good that in late January 2008 — the year the U.S. Open was coming to Torrey Pines — caddie John Wood lingered behind the 18th green on the South course and watched as Woods finished off an opening-round 67.

“He just won two tournaments with one round,” the caddie said, and he was right. Woods won the Buick Invitational by eight shots, and the U.S. Open for his 14th major.

Now, no one is sure what to expect.

He said he has been playing six days a week at home since the start of the year. There is no concern about his back giving out.

The next step is posting a score against a full field with a 36-hole cut.

Woods said he has a schedule in mind for the next few months, though he’s not ready to reveal that publicly. The only other tournament on his schedule is the Genesis Open at Riviera in three weeks. Woods, at No. 647 in the world, is not eligible for a pair of World Golf Championships in March. The likely choices would be the Honda Classic near his home in Florida and the Arnold Palmer Invitational at Bay Hill, where he has won eight times.

“I’m just trying to build toward April,” he said. “I’m looking forward to playing a full schedule and getting ready for the Masters, and I haven’t done that in a very long time. That’s usually been my schedule and my outlook … to try to get ready for Augusta. And there’s no reason to change that.”

He wants to get back to that level.

“There are times when it is easy to go out there and shoot 65s. I just need to get my game to where it’s like that again,” he said. “A lot of the guys have been playing well, have been playing a lot, and they’re seasoned. I know this is early in the year, but they’re seasoned already and I’m not. I’m not there yet. I’ll get some tournaments under my belt and keep progressing.”