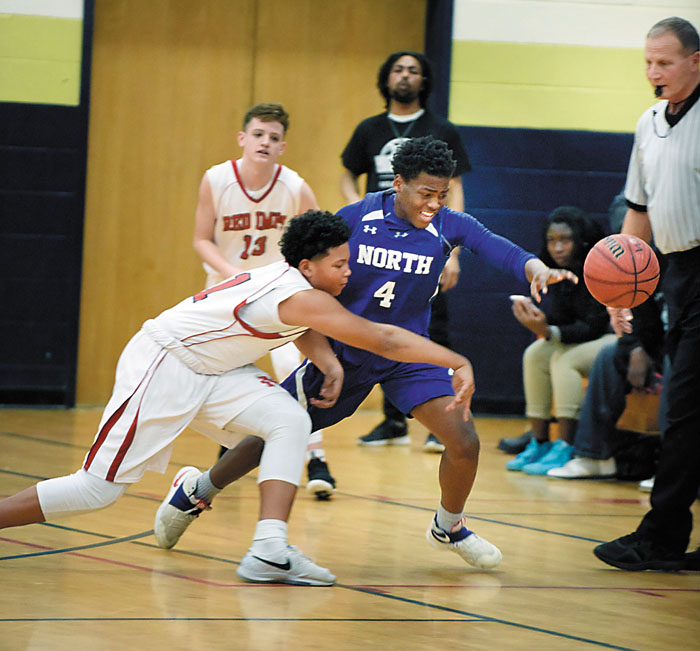 “It’s better to play the best competition,” winning coach Napolean Lowery III said after Mooresville (16-1) avenged its only loss. “And North Rowan pushed us to the max in all three games this season. Every one of them was tough. We knew they’d be prepared today and they were.”

North (14-3) was — and wasn’t. It played three subpar quarters before regaining its pulse in the final period. The Mavericks made only three baskets in the first half and trailed 21-12 at the break. And despite a couple of driving layups by Javeon Foster in the third quarter, they found themselves 10 points down with six minutes to play.

“We had a lot of turnovers early and really didn’t get into the flow of the game until the fourth quarter,” said North coach Reggie McConneaughey, Jr. “We were playing catch-up the whole game, but never did. That’s what killed us.”

“We weren’t getting back on defense, we weren’t rebounding and we kind of rushed our shots in the first half,” said North’s Quashone Carpenter. “When we beat them during the (regular) season, we were better. We kept our composure and had the lead the whole game.”

They never had it in this one. Part of the problem was Mooresville’s defensive alignment, which targeted Carpenter.

“We did some things differently than the last time,” Lowery said. “We focused on the point guard, played him man-to-man, but made it look like a trap defense.”

That defensive assignment went to Stewart.

“(Carpenter) was an aggressive player,” he said. “He could dribble left and right and could finish his layups. But it wasn’t just me. We won it as a team, working hard and playing tough defense.”

North trailed by 12 points early in the final quarter before Carpenter made successive bank shots. Stewart’s wrap-around layup with fourth minutes to play and his dribble-drive layup from the left side two minutes later restored a 43-31 lead with 1:58 remaining.

“I think it got psychological,” McConneaughey said. “It started getting to them. They kept looking at the clock. I’ve told them all season, ‘You’ve got to play until it says triple-zeroes. That’s when the game is over.’ But they kind of got down on themselves.”

Mooresville went up by as many as 14 points when Howell converted both ends of a one-and-one with 1:41 remaining. North answered when instant-offense reserve Robert Ford entered and drained 3-pointers from the left and right sides just 30 seconds apart.

“It’s pretty hard to walk away after such a great season,” said North’s Doevon Profit. “We just didn’t play enough defense, but the coach got us here. All season, he focused on us and not the other team.”

Afterward, McConneaughey remained cordial and upbeat. “I liked this team,” he said. “We definitely over-achieved. Last year, we were 10-6, this year, 14-3. It’s been one of my favorite years.”